COLUMBUS, Ohio -- Astronomers have spied a faraway star system that is so unusual, it was one of a kind -- until its discovery helped them pinpoint a second one that was much closer to home.

In a paper published in a recent issue of the Astrophysical Journal Letters, Ohio State University astronomers and their colleagues suggest that these star systems are the progenitors of a rare type of supernova.

They discovered the first star system 13 million light years away, tucked inside Holmberg IX, a small galaxy that is orbiting the larger galaxy M81. They studied it between January and October 2007 with the Large Binocular Telescope (LBT) on Mt. Graham in Arizona.

The star system is unusual, because it’s what the astronomers have called a “yellow supergiant eclipsing binary” -- it contains two very bright, massive yellow stars that are very closely orbiting each other. In fact, the stars are so close together that a large amount of stellar material is shared between them, so that the shape of the system resembles a peanut.

In a repeating cycle, one star moves to the front and blocks our view of the other. From Earth, the star system brightens and dims, as we see light from two stars, then only one star.

The two stars in this system appear to be nearly identical, each 15 to 20 times the mass of our sun.

José Prieto, Ohio State University graduate student and lead author on the journal paper, analyzed the new star system as part of his doctoral dissertation. In his research, he scoured the historical record to determine whether his group had indeed found the first such binary.

To his surprise, he uncovered another one a little less than 230,000 light years away in the Small Magellanic Cloud, a small galaxy that orbits our own Milky Way.

The star system had been discovered in the 1980s, but was misidentified. When Prieto re-examined the data that astronomers had recorded at the time, he saw that the pattern of light was very similar to the one they had detected outside of M81. The stars were even the same size -- 15 to 20 times the mass of the sun -- and melded together in the same kind of peanut shape. The system was clearly a yellow supergiant eclipsing binary.

“We didn’t expect to find one of these things, much less two,” said Kris Stanek, associate professor of astronomy at Ohio State. “You never expect this sort of thing. But I think this shows how flexible you have to be in astrophysics. We needed the 8.4-meter LBT to spot the first binary, but the second one is so bright that you could see it with binoculars in your back yard. Yet, if we hadn’t found the first one, we may never have found the second one.”

“It shows that there are still valuable discoveries hidden in plain sight. You just have to keep your eyes open and connect the dots.”

The find may help solve another mystery. Of all the supernovae that have been studied over the years, two have been linked to yellow supergiants -- and that’s two more than astronomers would expect.

Prieto explained why. Over millions of years, a star will burn hotter or cooler as it consumes different chemical elements in its core. The most massive stars swing back and forth between being cool red supergiants or hot blue ones. They spend most of their lives at one end of the temperature scale or the other, but spend only a short time in-between, where they are classified as yellow. Most stars end their life in a supernova at the red end of the cycle; a few do at the blue end. But none do it during the short yellow transitional phase in between.

At least, that’s what astronomers thought.

Prieto, Stanek, and their colleagues suspect that yellow binary systems like the ones they found could be the progenitors of these odd supernovae.

“When two stars orbit each other very closely, they share material, and the evolution of one affects the other,” Prieto said. “It’s possible two supergiants in such a system would evolve more slowly, and spend more time in the yellow phase -- long enough that one of them could explode as a yellow supergiant.”

The discovery of this yellow supergiant binary system is just the first result of a long-term LBT project to monitor stellar variability in the nearby universe. That project is led by Ohio State professor of astronomy, Chris Kochanek. He and Rick Pogge, also a professor of astronomy, are coauthors on the paper in Astrophysical Journal Letters.

Their collaborators were from the University of Minnesota, the Osservatorio Astronomico di Padova, Steward Observatory, the Max-Planck-Institut für extraterrestrische Physik, the Osservatorio Astronomico di Roma, the University of Notre Dame, and the Large Binocular Telescope Observatory. They used observations from the 8.4-meter LBT and from the 2.4-meter telescope at the nearby MDM observatory.

2 new star systems are first of their kind ever found 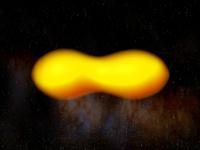 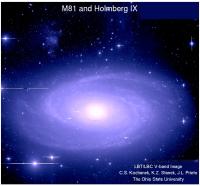