Many species are migrating toward Earth's poles in response to climate change, and their habitats are shrinking in the process, researchers say. Two new reports focusing on marine organisms, which have been moving pole-ward at higher rates than terrestrial creatures, show how factors, including those not directly related to climate change, are limiting the ranges of corals and fish. Paul Muir and colleagues investigated 104 species of reef corals -- collectively known as the staghorn corals -- and confirmed the hypothesis that these sunlight-dependent organisms are restricted to shallower depths at higher latitudes, where sunlight doesn't penetrate surface water as well, especially during winter. Thus, the corals must nest in shallower water as they move away from the equator, according to the researchers. For the corals to continue moving pole-ward, Muir et al. suggest they will have to decrease their maximum depth by about 0.6 meters (or almost two feet) for every degree of latitude they migrate. However, staghorn corals can only go so shallow before issues such as temperature, salinity, and damage from waves and swells limit them, they say. In a separate study, Curtis Deutsch and colleagues suggest that habitats for many fish will contract by about 20% because warming ocean waters decrease oxygen abundance while simultaneously increasing metabolic demands. The researchers studied the metabolism and geographical distributions of species such as cod, rock crab, seabream, and eelpout in order to create a map of metabolic indices -- or the ratios of available oxygen to the oxygen needed by organisms at rest. If climate change proceeds along its current path, the researchers suggest that species' habitats will shrink near the equator and in some northern, high-latitude regions as oxygen levels fall below the required metabolic indices. A Perspective article by Joan Kleypas discusses these "invisible barriers to dispersal" in greater detail. 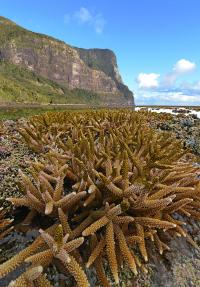 At the Limit: Lord Howe Island