An important feature for life is what embryos receive from mom and dad upon fertilization. Oddly enough, centrioles, the structures responsible for cell division and flagella movement, are given by the paternal gamete. How oocytes, the maternal gametes, lose centrioles and the importance of doing so for female fertility has been an enigma since the 1930s. A team led by Mónica Bettencourt-Dias at the Instituto Gulbenkian de Ciência (IGC; Portugal) have cracked this mystery, shedding light upon a critical mechanism whose deregulation leads to infertility, and that is important for the working of other cell types.

The results of this study, now published in the prestigious scientific journal Science, show that centrioles normally have a coating that protects them and that this coat is lost inside the oocyte, hence centrioles are eliminated. They further show that if the centrioles are not eliminated, those mothers are sterile.

"The mechanism by which centrioles disappear in the egg in all animals remained elusive and paradoxical, as these structures were thought to be exceptionally stable" says Mónica Bettencourt-Dias. Using as an experimental tool to study this process the fruit fly (Drosophila melanogaster), Ana Marques and Inês Bento from the team saw that centrioles are eliminated step-wise: first they lose their coating, then centrioles disappear. The researchers observed that the loss of centriole coating is triggered by the loss of an important centriole regulator, the polo kinase protein. "Strikingly, adding back polo was sufficient to maintain coating, and to avoid maternal centriole elimination, something no-one was able to do before!" says Ana Marques.

The relevance for sexual reproduction of losing centrioles in the oocyte was also not known. "When we artificially retained maternal centrioles, the resulting embryo had excessive centrioles (both maternal and paternal) resulting in abnormal divisions and aborted development, showing that centriole elimination is critical for sexual reproduction" says Inês Bento. "The regulation of centriole stability in other tissues, is likely to be critical for normal development and regeneration; this is something we are now pursuing", adds Mónica Bettencourt-Dias. 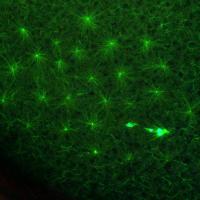