The unfinished Obelisk Quarry in Aswan, Egypt, has a canal that may have connected to the Nile and allowed the large stone monuments to float to their permanent locations, according to an international team of researchers. This canal, however, may be allowing salts from ground water to seep into what has been the best preserved example of obelisk quarrying in Egypt.

"Working deposits and surfaces exposed during excavation are being damaged by accumulation of salts," the researchers said at the Second International Conference on Geology of the Tethyr at the Cairo University. "These unique artifacts document quarry methods and should be preserved."

The granite quarry, located on the east bank of the Nile in the center of Aswan City, contains a very large unfinished obelisk that was not completed because of latent cracks. While the cracks were bad for the ancient Egyptian stone carvers, the unfinished monument provides the opportunity for archaeologists to understand how people worked hard stone quarries.

Excavations by the Aswan Office of the Supreme Council of Antiquities, Egypt, began in 2002 to prepare the site for tourists. Among the discoveries made were a trench at least 8.25 feet deep. Archaeologists were unable to reach the bottom because of groundwater incursion.

"Some researchers suggested that this trench linked the quarry with the Nile," says Dr. Richard R. Parizek, professor of geology and geo-environmental engineering at Penn State. "Transporting huge granite monoliths by boat to the Nile during the annual flood would appear to be easier than having to transport these blocks overland from the quarry to the Nile."

The researchers used both soil temperature readings and shallow seismic reflection to outline the canal without excavation because a cemetery and the recently completed tourist amenities are in the path of the canal. They drilled holes into the ground and fitted them with pipes so the researchers could measure temperature. Because this is a granite quarry, most of the underlying area is solid granite, which has little groundwater circulation and is heated and cooled only by geothermal energy from beneath and the outdoor above-ground temperatures. However, where the canal may run, sediment-filled areas would respond to groundwater circulation and show temperature differences.

"The temperature readings, taken in spring and winter, did establish that the canal continued another 495 feet past the aborted excavations," says Parizek. "We did not go any further because we were at the boundary of the antiquities site and would have entered the cemetery. "

The presence of a sediment-filled canal would explain the salt deposition in the quarry that is destroying not only ancient graffiti at the site, but also profiles of the obelisk-sculpting process. If, as the groundwater rises, the water in the filled canal rises, the salt would be deposited as the water receded.

Confirming that the canal exists is the first step in controlling the water damage to the site. The researchers suggest three possible solutions to the water damage problem. The first approach would be to drill wells or a sump in the gravel sediment fill and pump out the water to lower the water table.

"This would have to be done continually to be effective," says Parizek.

The second approach would work if the extent of the water saturated gravel is located inside the Antiquities property or adjacent to the property. A trench excavated to the granite bedrock and filled with compact clay would eliminate groundwater seepage back to the obelisk quarry. A small amount of pumping would still be necessary occasionally.

The third option, if removing gravel to bedrock was impossible and the canals extension was verified, would be to place a grout curtain in the saturated portion of the canal. A series of boreholes through the pavement, sidewalks and at the edge of the cemetery strategically located could deliver grout to appropriate locations to reduce water problems. This option also includes pumping as needed to remove water from the backfill deposits.

"Options two and three are similar and would both require less pumping than option one," says Parizek. "However, excavating to place a clay backfill layer would allow exploration and recovery of artifacts that might otherwise be entombed in grout."

The research team suggests that additional temperature and seismic measurements are needed to further extend the canal route. They suggest that test drilling would confirm the existence of the additional 495 feet of canal. The researchers also suggest that preservation and stabilization of the exposed archaeological remains is necessary to ensure that this record remains available for both tourists and researchers.

The proceedings of the Second International Conference on Geology of the Tethyr held at Cairo University are in preparation.

Meeting
Second International Conference on Geology of the Tethyr 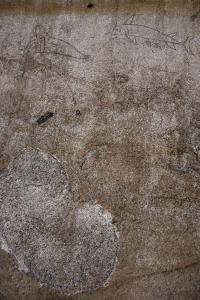