A large-scale genetic study of native North Americans offers new insights into the migration of a small group of Athapaskan natives from their subarctic home in northwest North America to the southwestern United States. The migration, which left no known archaeological trace, is believed to have occurred about 500 years ago.

The study, led by researchers at the University of Illinois, is detailed this month in the American Journal of Physical Anthropology. It relied on a genetic analysis of the Y chromosome and so offers a window on the unique ancestral history of the male Athapaskan migrants. Previous genetic studies of this group focused on mitochondrial DNA, which is passed down exclusively from mothers to their offspring.

The new findings reinforce the hypothesis that the Athapaskan migration involved a relatively small group that nonetheless was very successful at assimilating and intermixing with native groups already living in the southwest. The newcomers were so influential that the Athapaskan language family now dominates many parts of the Southwest. Now called Apacheans, the Navajo and Apache descendants of the early migrants are dispersed throughout the central Southwest and speak languages closely related to the Chipewyan, an Athapaskan language found in the subarctic.

(Language studies also revealed that Athapaskans migrated to the northwest U.S. and settled on the coast in parts of California and Oregon.)

How the Athapaskan migrants were able to spread their language – and genes – so successfully is unknown. Anthropologists note that the migrants probably arrived in the Southwest at a time of stress among indigenous groups as a result of an extended drought.

"A lot of the Y chromosomes have been replaced by European males," he said.

Malhi and his colleagues looked at specific regions on the Y chromosome that can vary from person to person. Tiny differences in the sequence of nucleotides that spell out the genetic code can be used to determine whether – and how closely – individuals are related to one another. Those who share many of these genetic signatures are more likely to share a recent common ancestor than those who don't.

The researchers analyzed 724 Y chromosomes from 26 native populations in North America. By including groups from across the continent (they studied tribes from Alaska to the Yucatan Peninsula and eastward to Hudson Bay and southeast U.S.), the researchers were able to analyze genetic differences among many native groups and to get an idea of the degree of European male infiltration into the native gene pool.

Consistent with a previous study of native North American mitochondrial DNA (also led by Malhi), the new analysis found a pattern that indicates that a small group of subarctic Athapaskans miYgrated to the Southwest. This pattern is reflected in the fact that many Apacheans carry the genetic signature of a small subset of subarctic Athapaskans.

These findings also affirm an earlier study of variants of a particular protein, albumin, in different native groups. That study showed that while many Apacheans carried an albumin variant common among natives in the Southwest and Mesoamerica, some Apacheans were the only ones to carry a variant that also occurs in subarctic populations.

Other patterns emerged from the Y chromosome analysis. One genetic signature associated with European males was detected in native males throughout North America, but was found at the highest frequency in groups living nearest to Hudson Bay, where trade between Europeans and the region's indigenous peoples was established in the early 17th century.

The new study, along with the earlier genetic and protein studies and the language analyses, is filling a gap in the archaeological record of Athapaskan migration, Malhi said.

This gap is the result of the fact that the Athapaskan migrants seem not to have altered the physical landscape, architecture or cultural practices of the populations they assimilated in the southwest U.S.

The only lasting evidence of the Athapaskan migration found so far is in their language and their genes, Malhi said.

"We're fitting together different lines of evidence," he said. "We're not just using the genetic data. We're using it in combination with the linguistic, oral histories from elders in the community and archaeological data. And even though there has been over a century of archaeological research done in the Southwest, there's not much information there about the Athapaskan migration into the Southwest."

Malhi is an affiliate of the U. of I.'s Institute for Genomic Biology. 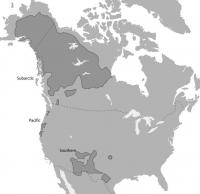