Scientists from the MARUM Center for Marine Environmental Sciences and the Max Planck Institute for Marine Microbiology in Bremen on board the German research vessel Meteor have discovered a new hydrothermal vent 500 kilometres south-west of the Azores. The vent with chimneys as high as one meter and fluids with temperatures up to 300 degrees Celsius was found at one thousand metres water depth in the middle of the Atlantic Ocean. The discovery of the new deep-sea vent is remarkable because the area in which it was found has been intensively studied during previous research cruises. The MARUM and Max Planck researchers describe their discovery in their video blog.

The Bremen scientists were able to find the hydrothermal vent by using the new, latest-generation multibeam echosounder on board the research vessel Meteor that allows the imaging of the water column above the ocean floor with previously unattained precision. The scientists saw a plume of gas bubbles in the water column at a site about 5 kilometers away from the known large vent field Menez Gwen that they were working on. A dive with the remote-controlled submarine MARUM-QUEST revealed the new hydrothermal site with smokers and animals typically found at vents on the Mid-Atlantic Ridge.

Since the discovery of the new vent, the scientists have been intensively searching the water column with the multibeam echosounder. To their astonishment, they have already found at least five other sites with gas plumes. Some even lie outside the volcanically active spreading zone in areas where hydrothermal activity was previously not assumed to occur.

"Our results indicate that many more of these small active sites exist along the Mid-Atlantic Ridge than previously assumed," said Dr. Nicole Dubilier, the chief scientist of the expedition. "This could change our understanding of the contribution of hydrothermal activity to the thermal budget of the oceans. Our discovery is also exciting because it could provide the answer to a long standing mystery: We do not know how animals travel between the large hydrothermal vents, which are often separated by hundreds to thousands of kilometres from each other. They may be using these smaller sites as stepping stones for their dispersal."

Research on deep-sea hydrothermal vents in the Atlantic is the objective of the 30 marine scientists from Hamburg, Bremen, Kiel, Portugal, and France who have been on board the German research vessel Meteor since September 6th. The expedition to the submarine volcano Menez Gwen near the Azores is financed by MARUM, the Center for Marine Environmental Sciences in Bremen. "One of the questions that the team would like to answer is why the hydrothermal sources in this area emit so much methane – a very potent greenhouse gas," says chief scientist Nicole Dubilier, who is also a member of the Steering Committee of the Census of Marine Life Vents and Seeps project ChEss (Chemosynthetic Ecosystem Science). "Another important focus of the research is the deep-sea mussels that live at the hydrothermal vents and host symbiotic bacteria in their gills. The mussels obtain their nutrition from these bacteria."

An expedition on a research vessel is not only marked by great moments, like this discovery; everyday life on the Meteor is also filled with other exciting activities and events. Work on a research vessel goes on round the clock throughout the entire expedition. In his video podcast "Neues vom Peildeck / News from the observation deck", available through the Hamburg-based newspaper Abendblatt, and in German and English on YouTube (see link below), Dennis Fink, a doctoral student at the Max Planck Institute for Marine Microbiology, reports on the activities of the ship's remote-operated vehicle (ROV) MARUM-QUEST, the various instruments used by the scientists and life on board the ship. In the two-minute video blogs, Fink and his colleagues show fascinating images direct from the sea floor.

Videos on YouTube (available in German and English): www.youtube.com/user/MaxPlanckSociety 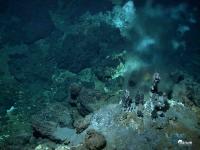