Various human nervous system diseases, such as amyotrophic lateral sclerosis (ALS), Alzheimer's, Huntington's, and Parkinson's diseases, are associated with the same basic disorder: the loss of nerve cells capacity to fold their proteins correctly, which causes protein aggregations that form "clumps" that end up generating the cell death.

Plants, like animals, use proteins to carry out the cellular functions that keep them alive. The protein composition is determined by the information present in the cellular DNA, but to exercise their biological function the proteins must also be folded in a three-dimensional configuration. If a protein does not fold correctly, it will not be able to fulfill its function. Stress situations, such as a sudden increase in temperature, cause missteps in the folding process, thus producing misfolded proteins that have to be either removed or repaired, otherwise they could cluster and form toxic aggregates.

Chloroplasts are the cellular compartments where the photosynthesis takes place in plant cells. In addition, they are responsible for producing many of the nutrients that allow the growth of plants and of animals that ingest them. A big part of this work is carried out by proteins, some of which are very prone to misfold and aggregate, thus losing their function.

A team of scientists led by Manuel Rodríguez-Concepción, a CSIC researcher at the Centre for Research in Agricultural Genomics (CRAG), has shown that under normal conditions chloroplasts get rid of these defective proteins by degrading them using the molecular machinery called protease Clp. However, when the accumulation of aggregated proteins exceeds the ability of the Clp protease to remove them, the chloroplasts generate a distress signal that travels to the nucleus of the cell to activate the production of repair proteins, called chaperones. The chaperones, in turn, are transported to the chloroplasts to undo the protein "lumps" and unfold the disaggregated proteins, favoring that they can be folded back correctly and recover their function in a few hours. These molecular mechanisms are similar to those that work in our nerve cells when misfolded proteins are produced in the mitochondria.

The research, conducted with the model plant Arabidopsis thaliana and published in the journal PLOS Genetics, has discovered a key gene (HsfA2), which activates the chaperone synthesis and thus rescues the cell from the toxic effects produced by misfolded protein accumulations. "The signaling pathway from the chloroplasts to the nucleus turns on a molecular switch called HsfA2. This key gene is also activated when a heat stroke causes problems of protein folding in other cellular compartments," explains Ernesto Llamas, the first author of the work.

According to Pablo Pulido, the third component of the team which conducted this research, "knowing how plants respond to the challenge of having some of their proteins lose their original structure and function, becoming potentially dangerous, is essential for better crop adaptation to adverse environmental conditions." This challenge is particularly relevant in the current context of climate change.

The research conducted at CRAG may also help to better understand how protein-misfolding nervous system diseases start, spread, and aggravate. "Basic research, that is to say, the research which deals with the processes that drive the basic functioning of living beings, constitutes the foundations on which applied research is based," says Rodríguez-Concepción. In this sense, the result of their research with plants could be transferred to new universal methods to correct the protein misfolding and thus impact the search for solutions to degenerative diseases that, to this day, remain incurable.

Discovered in plants a mechanism that corrects defects in protein folding 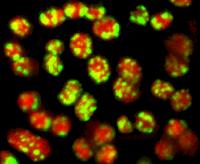 Chloroplasts Under the Microscope