Until recently, glaciers in the United States have been measured in two ways: placing stakes in the snow, as federal scientists have done each year since 1957 at South Cascade Glacier in Washington state; or tracking glacier area using photographs from airplanes and satellites.

We now have a third, much more powerful tool. While he was a doctoral student in University of Washington's Department of Earth and Space Sciences, David Shean devised new ways to use high-resolution satellite images to track elevation changes for massive ice sheets in Antarctica and Greenland. Over the years he wondered: Why aren't we doing this for mountain glaciers in the United States, like the one visible from his department's office window?

He has now made that a reality. In 2012, he first asked for satellite time to turn digital eyes on glaciers in the continental U.S., and he has since collected enough data to analyze mass loss for Mount Rainier and almost all the glaciers in the lower 48 states. He will present results from these efforts Oct. 22 at the Geological Society of America's annual meeting in Seattle.

The maps provide a twice-yearly tally of roughly 1,200 mountain glaciers in the lower 48 states, down to a resolution of about 1 foot. Most of those glaciers are in Washington state, with others clustered in the Rocky Mountains of Montana, Wyoming and Colorado, and in California's Sierra Nevada.

To create the maps, a satellite camera roughly half the size of the Hubble Space Telescope must take two images of a glacier from slightly different angles. As the satellite passes overhead, moving at about 4.6 miles per second, it takes images a few minutes apart. Each pixel of the image covers 30 to 50 centimeters (about 1 foot) and a single image can be tens of miles across.

Shean's technique uses automated software that matches millions of small features, such as rocks or crevasses, in the two images. It then uses the difference in perspective to create a 3-D model of the surface.

The first such map of a Mount St. Helens glacier was obtained in 2012, and the first for Mount Rainier in 2014. The project has grown steadily since then to include more glaciers every year.

The results confirm stake measurements at South Cascade Glacier, showing significant loss over the past 60 years. Results at Mount Rainier also reflect the broader shrinking trends, with the lower-elevation glaciers being particularly hard hit. Shean estimates cumulative ice loss of about 0.7 cubic kilometers (900 million cubic yards) at Mount Rainier since 1970. Distributed evenly across all of Mount Rainier's glaciers, that's equivalent to removing a layer of ice about 25 feet (7 to 8 meters) thick.

"There are some big changes that have happened, as anyone who's been hiking on Mount Rainier in the last 45 years can attest to," Shean said. "For the first time we're able to very precisely quantify exactly how much snow and ice has been lost."

The glacier loss at Rainier is consistent with trends for glaciers across the U.S. and worldwide. Tracking the status of so many glaciers will allow scientists to further explore patterns in the changes over time, which will help pinpoint the causes -- from changes in temperature and precipitation to slope angle and elevation.

"The next step is to integrate our observations with glacier and climate models and say: Based on what we know now, where are these systems headed?" Shean said.

Those predictions could be used to better manage water supplies and flood risks.

"We want to know what the glaciers are doing and how their mass is changing, but it's important to remember that the meltwater is going somewhere. It ends up in rivers, it ends up in reservoirs, it ends up downstream in the ocean. So there are very real applications for water resource management," Shean said. "If we know how much snow falls on Mount Rainier every winter, and when and how much ice melts every summer, that can inform water resource managers' decisions."

Shean will begin a faculty position this winter in the UW's Department of Civil & Environmental Engineering, where he will explore those questions further for the U.S. as well as for other regions, like high-mountain Asia, where over a billion people depend on glacier-fed rivers for irrigation, hydropower and drinking water.

Mountain glaciers shrinking across the West 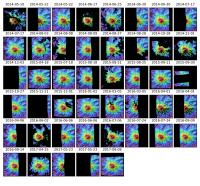 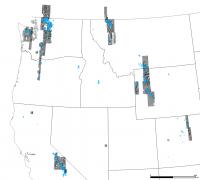