For 12 days in January 2016, a football-field-sized balloon with a telescope hanging beneath it floated 24 miles above the Antarctic continent, riding the spiraling polar vortex. On Jan. 31, 2016, scientists sent the pre-planned command to cut the balloon - and the telescope parachuted to the ground in the Queen Maud region of Antarctica.

The telescope sat on the ice for an entire year.

The scientists did quickly recover the data vaults from the NASA-funded mission, called GRIPS, which is short for Gamma-Ray Imager/Polarimeter for Solar flares. But due to incoming winter weather - summer runs October through February in Antarctica - they had to leave the remaining instruments on the ice and schedule a recovery effort for the following year. Finally, in January 2017, it was warm and safe enough to recover the instruments.

This process of drop and later recovery is common for such balloon missions and the telescope appears to be in good shape.

"Despite sitting on the ice for a year, no snow had made it into the electronics," said Hazel Bain, a University of California, Berkeley solar physicist on the GRIPS team. "The cryostat instrument, which houses the GRIPS detectors, seemed in great condition, and we're hoping to use some of the instruments again." Berkeley physics graduate student Nicole Duncan and Bain led the recovery effort.

GRIPS is a helium balloon-borne telescope designed to study high-energy particles generated by solar flares and help scientists better understand what causes these giant eruptions on the sun, which can send energy toward our planet and shape the very nature of near-Earth space. The telescope studies these particles with three times more detail than current state-of-the-art space instruments. Each kind of solar radiation conveys unique information about the physics underlying flares. GRIPS specifically observes hard X-ray and gamma-ray emissions, which reveal the composition, abundance and dynamics of solar flare material.

On Jan. 19, 2016, GRIPS began its flight near McMurdo Station, suspended under a giant balloon. During its flight, GRIPS observed 21 C-class, relatively low-level, solar flares. The scientists studied those observations throughout 2016, but had to wait a year to be reunited with the actual scientific instruments.

The following Antarctic summer of January 2017, the scientists returned to Amundsen-Scott South Pole Station to recover the payload. Over the course of three one-day flights to the GRIPS landing site, about 500 miles away from the station, they successfully dug out and recovered GRIPS instruments and hardware.

The instruments were flown back to the South Pole station, dried out and packed for shipping to McMurdo Station. The Ocean Giant, McMurdo Station's annual resupply vessel, will return the instruments to the U.S., where they will eventually undergo testing and evaluation for potential future flights. GRIPS is a NASA-funded project largely designed, built and tested by the University of California, Berkeley's Space Science Laboratory.

NASA-funded balloon recovered a year after flight over Antarctica 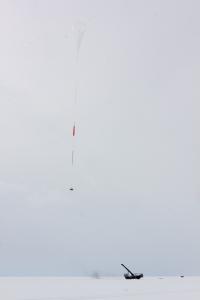