The widespread view of Neanderthals as cognitively inferior to early modern humans is challenged by new research from the University of Bristol published today in Proceedings of the National Academy of Sciences.

Professor João Zilhão and colleagues examined pigment-stained and perforated marine shells, most certainly used as neck pendants, from two Neanderthal-associated sites in the Murcia province of south-east Spain (Cueva de los Aviones and Cueva Antón). The analysis of lumps of red and yellow pigments found alongside suggest they were used in cosmetics. The practice of body ornamentation is widely accepted by archaeologists as conclusive evidence for modern behaviour and symbolic thinking among early modern humans but has not been recognised in Neanderthals – until now.

Professor Zilhão said: "This is the first secure evidence that, some 50,000 years ago – ten millennia before modern humans are first recorded in Europe – the behaviour of Neanderthals was symbolically organised."

A Spondylus gaederopus shell from the same site contained residues of a reddish pigmentatious mass made of lepidocrocite mixed with ground bits of hematite and pyrite (which, when fresh, have a brilliant black, reflective appearance), suggesting the kind of inclusion 'for effect' that one would expect in a cosmetic preparation.

The choice of a Spondylus shell as the container for such a complex recipe may relate to the attention-grabbing crimson, red, or violet colour and exuberant sculpture of these shells, which have led to their symbolic- or ritual-related collection in a variety of archaeological contexts worldwide.

A concentration of lumps of yellow colorant from Cueva de los Aviones (most certainly the contents of a purse made of skin or other perishable material) was found to be pure natrojarosite – an iron mineral used as a cosmetic in Ancient Egypt.

While functionally similar material has been found at Neanderthal-associated sites before, it has been explained by stratigraphic mixing (which can lead to confusion about the dating of particular artefacts), Neanderthal scavenging of abandoned modern human sites, or Neanderthal imitation without understanding of behaviours observed among contemporary modern human groups.

For example, controversy has surrounded the perforated and grooved teeth and decorated bone awls found in the Châtelperronian culture of France. In earlier work, Professor Zilhão and colleagues have argued they are genuine Neanderthal artefacts which demonstrate the independent evolution of advanced cognition in the Neanderthal lineage.

However, the Châtelperronian evidence dates from 40,000 to 45,000 years ago, thus overlapping with the period when anatomically modern human people began to disperse into Europe (between 40,000 and 42,000 years ago) and leaving open the possibility that these symbolic artifacts relate, in fact, to them.

Professor Zilhão said: "The evidence from the Murcian sites removes the last clouds of uncertainty concerning the modernity of the behaviour and cognition of the last Neanderthals and, by implication, shows that there is no reason any more to continue to question the Neanderthal authorship of the symbolic artefacts of the Châtelperronian culture.

"When considering the nature of the cultural and genetic exchanges that occurred between Neanderthals and modern humans at the time of contact in Europe, we should recognise that identical levels of cultural achievement had been reached by both sides."

Accurate radiocarbon dating of shell and charcoal samples from Cueva de los Aviones and Cueva Antón was crucial to the research. The dating was undertaken at the University of Oxford's Radiocarbon Accelerator Unit.

Dr Thomas Higham, Deputy Director of the Radiocarbon Unit in the School of Archaeology said: "Dating samples that approach the limit of the technique, at around 55,000 years before present, is a huge challenge. We used the most refined methods of pre-treatment chemistry to obtain accurate dates for the sites involved by removing small amounts of more modern carbon contamination to discover that the shells and charcoal samples were as early as 50,000 years ago." 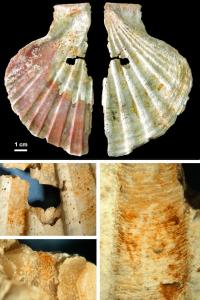