A study uncovers how poison-dart frogs remain resistant to large quantities of the potent toxin stored in their skin glands. The indigenous people of Central America devise blowpipe weapons by daubing darts with toxins derived from the skin glands of poison-dart frogs (Phyllobates terribilis). One such toxin, batrachotoxin (BTX), pries open sodium channels and alters their ion selectivity, disrupting electrical transmission through cell membranes. To determine how poison-dart frogs avoid intoxication despite harboring enough toxin to kill up to 20,000 mice, Sho-Ya Wang and Ging Kuo Wang examined whether five previously reported, naturally occurring amino acid replacements introduced into a subunit of the rat muscle sodium channel confer BTX resistance. As expected, replacing all five amino acids with natural variants conferred complete resistance in electrophysiological experiments. In contrast, mutant channels with single amino acid replacements remained sensitive to BTX--with the exception of the N1584T mutant, in which an asparagine residue at a specific location in the channel's alpha-subunit was substituted with threonine. The N1584T variant, previously reported in P. terribilis muscle cells, could result from a single nucleotide change in the channel's genetic script and confer BTX resistance on adult frogs, which can store more than 1 mg of the toxin in their skin. The counterpart asparagine residue in the alpha-subunit of the frog's sodium channel likely represents a key element of the BTX receptor and helps explain how poison-dart frogs avoid self-intoxication, according to the authors. 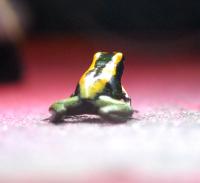