Doctors and scientists at the University of Southampton have used advanced 3D X-ray imaging technology to give new insight into the way an aggressive form of lung disease develops in the body.

Originally designed for the analysis of substantial engineering parts, such as jet turbine blades, the powerful scanning equipment at Southampton's µ-VIS Centre for Computed Tomography, has been used to image Idiopathic Pulmonary Fibrosis (IPF) lung tissue samples for the first time.

IPF is usually diagnosed via a hospital CT scan or by using a microscope to view a lung biopsy sample however Southampton researchers have now successfully applied Microfocus CT to image biopsy samples. This allowed them to view each lung sample with a level of detail similar to an optical microscope but now in 3D.

It had been thought that active scarring in IPF progressed like a large 'wave' from the outside to the inside of the lung. Instead, the study, published in JCI Insight, found that there are large numbers of individual sites of active disease scarring. The research team, from the National Institute for Health Research Southampton Respiratory Biomedical Research Unit, believes this finding will help to ensure doctors develop targeted therapies focussing on these areas.

Each year over 5,000 new cases of IPF are diagnosed in the UK, and the number of cases is increasing by around 5 per cent every year. The condition, one of a group of disorders known collectively as interstitial lung diseases, causes inflammation and scarring of the lung tissue. This makes it increasingly difficult to breathe, and it leaves sufferers with a life expectancy of only three to five years.

The study's lead author Dr Mark Jones, a Wellcome Trust fellow from the University of Southampton and University Hospital Southampton, comments: "Whilst accurate diagnosis of IPF is essential to start the correct treatment, in certain cases this can be extremely challenging to do using the tools currently available. This technology advance is very exciting as for the first time it gives us the chance to view lung biopsy samples in 3D. We think that the new information gained from seeing the lung in 3D has the potential to transform how diseases such as IPF are diagnosed. It will also help to increase our understanding of how these scarring lung diseases develop which we hope will ultimately mean better targeted treatments are developed for every patient."

The study was funded by the Wellcome Trust and also involved researchers at the Royal Brompton Hospital, National Jewish Health in Colorado, and University College Dublin. The µ-VIS Centre received launch funding from the Engineering and Physical Sciences Research Council (grant EP-H01506X) and the University of Southampton, along with ongoing imaging collaboration with Nikon Metrology.

Microfocus CT can scan inside objects in great detail - rotating 360 degrees whilst taking thousands of 2D images, which are then used to build detailed 3D images.

Professor Ian Sinclair, Director of the µ-VIS Centre for Computed Tomography, says: "Our centre examines a wide variety of objects from the layup of individual carbon fibres in aircraft wing components, to the delicate roots of growing plants, and now parts of the body. By being a multidisciplinary centre we have a wealth of expertise that have allowed us to apply this technology in a way that has not been done before. This work is of great significance to us, with the long-term potential to translate our research from the bench to the bedside of patients."

The Southampton team are now studying how this technique can help doctors improve the way we diagnose such diseases more accurately, to ensure every patient will receive the correct treatment. 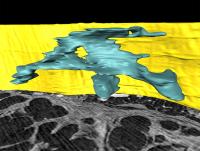 Complex Structure of an Area of Active Fibrosis