System 94B has not been classified as a tropical depression, but NASA satellite data has shown that it is creating heavy rainfall near India's southeastern coast. A second NASA satellite revealed that strong wind shear is continuing to push convection to the northwest of System 94B's center of circulation.

The Tropical Rainfall Measuring Mission (TRMM) satellite viewed an area of thunderstorms associated with System 94B near the east coast of India in the Bay of Bengal on December 7 at 0123 UTC. Data from TRMM's Precipitation Radar (PR) and Microwave Imager (TMI) showed that some severe thunderstorms in this area off the Indian coast were producing very heavy intense rainfall of over 50mm/hr (~2 inches/hour).

The TRMM satellite's main purpose is to measure rainfall over the tropics but it has also proven very valuable for monitoring development of tropical cyclones. TRMM is a joint mission between NASA and the Japanese space agency JAXA.

On Dec. 7 the center of System 94B was located about 240 nautical miles east-southeast of Chennai, India near 11.4 North latitude and 84.0 East longitude.

NASA's Aqua satellite captured an image of System 94B and continued to show that its main convection (rapidly rising air that forms the thunderstorms that power a tropical cyclone or low pressure area) are northwest of the storm's center of circulation. That's an indication that the strong wind shear that was battering the low pressure area earlier this week is still continuing.

The Atmospheric Infrared Sounder (AIRS) instrument captured an image of System 94B's cold cloud tops on Dec. 6 at 20:11 UTC (3:11 p.m. EST). The image showed most of the strongest convection, and highest, coldest cloud tops remained off-shore over the waters of the western Bay of Bengal. The coldest cloud top temperatures were as cold as or colder than -63 degrees Fahrenheit (-52 Celsius).

The AIRS infrared image did show that there were some strong thunderstorms along the immediate southeastern coast of India, where heavy rain was falling in the state of Tamil Nadu, India.

Tamil Nadu is one of the 28 states and lies in the southernmost part of the Indian Peninsula. Its capital city is Chennai located in the northeastern part of the state.

The Joint Typhoon Warning Center (JTWC) maintains forecast responsibility for this storm. The JTWC noted that maximum sustained winds at the surface are estimated between 20 to 25 knots (23 to 28 mph) and minimum sea level pressure is near 1004 millibars.

Today's JWTC forecast said, "Based on the sheared convection and relatively high vertical wind shear, the potential for the development of a significant tropical cyclone within the next 24 hours remains poor." 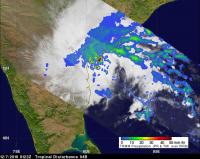