You probably don't think much of fungi, and especially those that turn bread moldy, but researchers reporting in the Cell Press journal Current Biology on March 17, 2016 have evidence that might just change your mind. Their findings suggest that a red bread mold could be the key to producing more sustainable electrochemical materials for use in rechargeable batteries.

The researchers show for the first time that the fungus Neurospora crassa can transform manganese into a mineral composite with favorable electrochemical properties.

Gadd and his colleagues have long studied the ability of fungi to transform metals and minerals in useful and surprising ways. In earlier studies, the researchers showed that fungi could stabilize toxic lead and uranium, for example. That led the researchers to wonder whether fungi could offer a useful alternative strategy for the preparation of novel electrochemical materials too.

"We had the idea that the decomposition of such biomineralized carbonates into oxides might provide a novel source of metal oxides that have significant electrochemical properties," Gadd says.

In fact, there have been many efforts to improve lithium-ion battery or supercapacitor performance using alternative electrode materials such as carbon nanotubes and other manganese oxides. But few had considered a role for fungi in the manufacturing process.

In the new study, Gadd and his colleagues incubated N. crassa in media amended with urea and manganese chloride (MnCl2) and watched what happened. The researchers found that the long branching fungal filaments (or hyphae) became biomineralized and/or enveloped by minerals in various formations. After heat treatment, they were left with a mixture of carbonized biomass and manganese oxides. Further study of those structures show that they have ideal electrochemical properties for use in supercapacitors or lithium-ion batteries.

"We were surprised that the prepared biomass-Mn oxide composite performed so well," Gadd says. In comparison to other reported manganese oxides in lithium-ion batteries, the carbonized fungal biomass-mineral composite "showed an excellent cycling stability and more than 90% capacity was retained after 200 cycles," he says.

The new study is the first to demonstrate the synthesis of active electrode materials using a fungal biomineralization process, illustrating the great potential of these fungal processes as a source of useful biomaterials.

Gadd says they'll continue to explore the use of fungi in producing various potentially useful metal carbonates. They're also interested in investigating such processes for the biorecovery of valuable or scarce metal elements in other chemical forms.

The authors acknowledge financial support from the China Scholarship Council and the 1000 Talents Plan with the Xinjiang Institute of Ecology and Geography, Chinese Academy of Sciences. 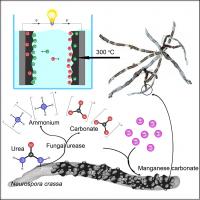