Scientists at the National Institute of Standards and Technology (NIST) have developed a new device that measures the motion of super-tiny particles traversing distances almost unimaginably small--shorter than the diameter of a hydrogen atom, or less than one-millionth the width of a human hair. Not only can the handheld device sense the atomic-scale motion of its tiny parts with unprecedented precision, but the researchers have devised a method to mass produce the highly sensitive measuring tool.

It's relatively easy to measure small movements of large objects but much more difficult when the moving parts are on the scale of nanometers, or billionths of a meter. The ability to accurately measure tiny displacements of microscopic bodies has applications in sensing trace amounts of hazardous biological or chemical agents, perfecting the movement of miniature robots, accurately deploying airbags and detecting extremely weak sound waves traveling through thin films.

The researchers measured subatomic-scale motion in a gold nanoparticle. They did this by engineering a small air gap, about 15 nanometers in width, between the gold nanoparticle and a gold sheet. This gap is so small that laser light cannot penetrate it.

However, the light energized surface plasmons--the collective, wave-like motion of groups of electrons confined to travel along the boundary between the gold surface and the air.

The researchers exploited the light's wavelength, the distance between successive peaks of the light wave. With the right choice of wavelength, or equivalently, its frequency, the laser light causes plasmons of a particular frequency to oscillate back and forth, or resonate, along the gap, like the reverberations of a plucked guitar string.

Meanwhile, as the nanoparticle moves, it changes the width of the gap and, like tuning a guitar string, changes the frequency at which the plasmons resonate.

The interaction between the laser light and the plasmons is critical for sensing tiny displacements from nanoscale particles, notes Aksyuk. Light can't easily detect the location or motion of an object smaller than the wavelength of the laser, but converting the light to plasmons overcomes this limitation. Because the plasmons are confined to the tiny gap, they are more sensitive than light is for sensing the motion of small objects like the gold nanoparticle.

To use this motion-sensing technique in a practical device, Aksyuk and Roxworthy embedded the gold nanoparticle in a microscopic-scale mechanical structure--a vibrating cantilever, sort of a miniature diving board--that was a few micrometers long, made of silicon nitride. Even when they're not set in motion, such devices never sit perfectly still, but vibrate at high frequency, jostled by the random motion of their molecules at room temperature. Even though the amplitude of the vibration was tiny--moving subatomic distances--it was easy to detect with the new plasmonic technique. Similar, though typically larger, mechanical structures are commonly used for both scientific measurements and practical sensors; for example, detecting motion and orientation in cars and smartphones. The NIST scientists hope their new way of measuring motion at the nanoscale will help to further miniaturize and improve performance of many such micromechanical systems.

"This architecture paves the way for advances in nanomechanical sensing," the researchers write. "We can detect tiny motion more locally and precisely with these plasmonic resonators than any other way of doing it," said Aksyuk.

The team's fabrication approach allows production of some 25,000 of the devices on a computer chip, with each device tailored to detect motion according to the needs of the manufacturer.

Roxworthy and Aksyuk, the two authors of the new paper, work in NIST's Center for Nanoscale Science and Technology (CNST). 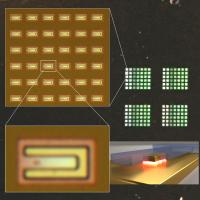