Recent work at Washington University in St. Louis sheds light on one of the most important events in earth-history, the conquest of land by plants 480 million years ago.

No would-be colonizer could have survived on dry land without the ability to deal with dehydration, a major threat for organisms accustomed to soaking in water.

Clues to how the first land plants managed to avoid drying out might be provided by bryophytes, a group that includes the mosses, many of which retain remarkable drought tolerance. Some mosses can become so dry they crumble in the hand, but, if remoistened, will begin making proteins within minutes.

The work, published in the Jan. 29 issue of the journal Science, reveals several components of the signaling pathway that underlies the moss's Lazarus-like behavior.

Intriguingly, the flowering plants haven't entirely lost the ability to tolerate dessication: this tolerance has just been limited to their seeds, which dry out over winter and yet come to life in the spring.

"We began by asking whether the moss Physcomitrella patens, which we have been using as a model system, employs different molecules or different regulatory systems than seeds. Or does the same mechanism underlie its desiccation tolerance and that of seeds?" says Ralph Quatrano, Ph.D., the Spencer T. Olin Professor of biology at WUSTL and senior author on the paper.

Earlier, Quatrano and others had showed that seeds depended on both the plant hormone ABA and the regulatory molecule ABI3 to survive drying.

Plant hormones, much like human hormones, are chemicals produced in small amounts that have a profound effect on growth and development. The release of one plant hormone, for example, causes bolting, the sudden growth of a floral stalk that signals the end of a leaf lettuce's tasty days.

ABI3 is a transcription factor, a molecule that binds to a specific DNA sequence next to the gene it regulates and controls the copying of that gene into messenger RNA, the first step in making a protein from the gene.

"The assumption," says Quatrano, "was that in the presence of ABI3, ABA triggers some genes to make proteins and then when you dry out the seed, those gene products protect the cells."

Looking for ABA and ABI3 in moss

In 1995 Quatrano and David Cove, Ph.D., a longtime colleague from the University of Leeds in the U.K., showed that ABA was at work in P. patens as well as in seeds.

In 2006 Heather Marella, a WUSTL graduate student, and Yoichi Sakata, Ph.D., a visiting scientist in Quatrano's lab, showed ABI3 is also present in P. patens. Whereas seed plants have only a single copy of the ABI3 gene, P. patens has at least three.

Marella and Sakata were able to delete the genes that code for ABI3 from the moss's genome. The resulting "knockout strains" would later prove useful in defining the separate roles of ABA and ABI3 in desiccation tolerance.

Joseph Cho, Ph.D., a postdoctoral fellow from Korea in Quatrano's lab, showed that pre-treating P. patens with ABA toughened it up, making the drought-tolerant moss desiccation-tolerant. But pre-treatment with ABA didn't help the knockout mosses.

"So the first major conclusion of the paper," says Quatrano, "is that ABA alone cannot trigger desiccation tolerance. In mosses, as in seeds, both ABA and ABI3 are needed."

Next Quatrano's team set out to find the genes the ABA/ABI3 signaling pathway was controlling.

Abha Khandelwal, Ph.D., a postdoctoral fellow from India, identified 22 genes in wild-type moss that are upregulated and begin to churn out more protein product when the moss is treated with ABA.

"If you look at those genes," says Quatrano, "some are very similar to what you find in seeds. For example, some resemble the genes for the LEA (late embryogenesis abundant) proteins." These proteins, which accumulate late in seed development, are believed to protect seeds from cellular damage caused by water loss, such as the unfolding of proteins or the loss of membrane integrity.

Up until now everything had been playing out as expected. But then something unforeseen happened.

"We treated the knockout strains with ABA to see what would happen to gene expression," Quatrano says. "We thought that none of the genes would be expressed in these strains."

"To our surprise, all of them were upregulated."

"This didn't make a lot of sense," says Quatrano. "Why does the moss need ABI3 to become desiccation tolerant if only ABA is needed to upregulate the genes?"

The puzzle of ABI3

"But when we rehydrated the knockout moss, all of the messenger RNA disappeared within 15 minutes," says Quatrano.

"This said to us that ABI3 either stabilizes the messenger RNA molecules whose creation is triggered by ABA, or it somehow allows messenger RNA to continue to be synthesized during rehydration."

In other words, ABI3 doesn't so much prepare tissue for desiccation as it helps it rehydrate after desiccation.

"So the second major conclusion of the research," says Quatrano, "was the timing of ABI3's role in desiccation tolerance."

What happened to seed plants?

"Our hypothesis," says Quatrano, "is that the first plants to move onto land were desiccation tolerant like P. patens and the other bryophytes, such as the hornworts and liverworts. As vascular plants evolved, they abandoned desiccation tolerance in favor of adaptations such as extensive root systems, waxy cuticles and stomata, that would allow them to prevent water loss rather than simply to survive it." The genes that confer desiccation tolerance were not lost, however. Instead their expression was sequestered within spores or seeds.

Could these genes and the signaling pathway that controls them be reactivated in the vegetative tissue of the plants?

"Our goal," says Quatrano, "is to characterize the entire regulatory network that controls the desiccation-tolerance system. Once we understand that network, we might be able to 'engineer' it into the vegetative tissue of seed plants to make them more tolerant to water loss."

"But this is all very speculative," he adds.

Still the vision of sun-burned fields of corn blushing green when long-awaiting rain finally relieves a drought is exciting to contemplate.

Moss helps chart the conquest of land by plants 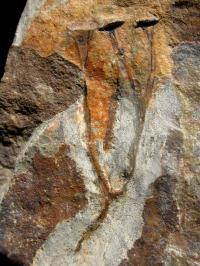