Physicists at New Zealand's University of Otago have pushed the frontiers of quantum technology by developing a steerable 'optical tweezers' unit that uses intense laser beams to precisely split minute clouds of ultracold atoms and to smash them together.

The Otago researchers' feat is set to enhance efforts to understand the mysterious ways that atoms interact at temperatures of less than a millionth of a degree above absolute zero. Its potential applications include new tools for probing microscopic structures or for sensors that can map minute variations in magnetic fields, says lead researcher Dr Niels Kjaergaard.

A description of their cutting-edge system is published in the April 1 issue of the US journal Optics Letters. It details an experiment in which the researchers used the technology to split a single ultracold cloud of rubidium atoms sequentially into 32 daughter clouds, spreading them out over nearly half a centimetre.

"This sort of precise control of these atoms is like being able to pull a delicate snowflake into two clean halves with your bare hands. It's quite remarkable that we are able to manipulate such minute and fragile samples while moving them such a comparatively large distance," Dr Kjaergaard says.

The experimental setup involves steering horizontal and vertical laser beams around through their interaction with precisely controlled travelling acoustic waves. These steerable laser beams confine and move the atoms. As well as splitting atom clouds, the system allows them to be collided.

"Tongue-in-cheek, we like to refer to our setup as the 'Littlest Hadron Collider'. In some ways it's the complete opposite of what is the world's largest and most powerful particle collider, because instead of using extreme acceleration, we smash our atom clouds together at a pedestrian pace of up to a metre per second," Kjaergaard says.

The steerable optical tweezers unit was constructed as part of Kris Roberts' Honour's thesis project in Dr Kjaergaard's research group at the Jack Dodd Centre for Quantum Technology at the Department of Physics, while the control system for the acoustic waves was built by Master's student Thomas McKellar.

"For researchers who are still students, these are quite notable achievements and I'm very proud of their work. It demonstrates the fantastic training opportunities that Otago can offer in its Physics programme," Dr Kjaergaard says.

Kris is now a Master's student in Dr Kjaergaard's research group. The group's work on the tweezers system is funded through a Marsden Fund of New Zealand grant. 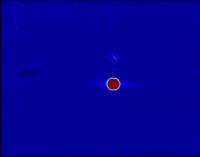