The giant wombat may no longer roam the wilds of Australia, but wild donkeys certainly do, and new research reveals that the two are ecologically similar. Human hunting caused the extinction of many megafauna (large herbivorous mammals) over the last 100,000 years, but recently humans have introduced numerous herbivore species, rewilding many parts of the world, particularly Australia.

In most places, these introduced megafauna are viewed as invasive species.

Now a new study, comparing the traits of introduced herbivores to those of the past, reveals that introductions have restored many important ecological traits that have been lost for thousands of years.

The authors note that our modern 'natural' world is very different than it was for the last 30-45 million years, throughout which thrived many megafauna, such as massive wombat-relatives called diprotodons, turtle-like glyptodons, hoofed kangaroos reminiscent of 'open-plains' horses, and two-story tall sloths. These big animals emerged in the fossil record not long after the demise of the dinosaurs but most were driven extinct by 10,000 years ago, most likely by the hunting pressure of our human ancestors in the Late Pleistocene.

The researchers found that by introducing species across the world, humans restored lost ecological traits to many ecosystems; making the world more similar to the pre-extinction Late Pleistocene and counteracting a legacy of extinctions.

Lead author and PhD student at the UTS Centre for Compassionate Conservation (CfCC), Erick Lundgren says the possibility that introduced herbivores might restore lost ecological functions had been suggested but not "rigorously evaluated".

The authors compared key ecological traits of herbivore species since before the Late Pleistocene extinctions, such as body size, diet, and habitat.

"This allowed us to compare species that are not necessarily closely related to each other, but are similar in terms of how they affect ecosystems," Lundgren said.

This is largely because 64% of introduced herbivores are most similar to extinct species than to local surviving native species. These introduced 'surrogates' for extinct species include taxonomically similar species in some places, like mustangs (wild horses) in North America who have replaced extinct pre-domestic horses. In places like Australia, however, introduced herbivores are different taxonomically but similar in terms of their traits.

Senior author Dr Arian Wallach from UTS CfCC said: "We usually think of nature as defined by the short period of time for which we have recorded history but this is already long after strong and pervasive human influences.

"Broadening our perspective to include the more evolutionary relevant past lets us ask more nuanced questions about introduced species and how they affect the world.

"We need a complete rethink of non-native species, to end eradication programs, and to start celebrating and protecting these incredible wildlife," Dr Wallach said.

By broadening our perspective beyond the past few hundred years - to a time before widespread human caused extinctions - we can recognise how introduced herbivores make the world more similar to the pre-extinction past, bringing with them broader biodiversity benefits, the authors conclude.

Counteracting a legacy of extinctions 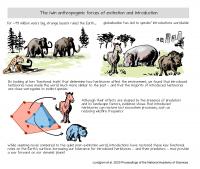 The twin anthroprogenic forces of extinction and introduction