The first-ever detailed study of the diets of great white sharks off the east Australian coast reveals this apex predator spends more time feeding close to the seabed than expected.

"Within the sharks' stomachs we found remains from a variety of fish species that typically live on the seafloor or buried in the sand. This indicates the sharks must spend a good portion of their time foraging just above the seabed," said lead author Richard Grainger, a PhD candidate at the Charles Perkins Centre and School of Life and Environmental Sciences at the University of Sydney.

"The stereotype of a shark's dorsal fin above the surface as it hunts is probably not a very accurate picture," he said.

The study, published today on World Oceans Day in the journal Frontiers in Marine Science, is an important contribution towards understanding the sharks' feeding and migratory habits.

Dr Vic Peddemors a co-author from the NSW Department of Primary Industries (Fisheries), said: "We discovered that although mid-water fish, especially eastern Australian salmon, were the predominant prey for juvenile white sharks in NSW, stomach contents highlighted that these sharks also feed at or near the seabed."

Mr Grainger said: "This evidence matches data we have from tagging white sharks that shows them spending a lot of time many metres below the surface."

The study examined the stomach contents of 40 juvenile white sharks (Carcharodon carcharias) caught in the NSW Shark Meshing Program. The scientists compared this with published data elsewhere in the world, mainly South Africa, to establish a nutritional framework for the species.

"Understanding the nutritional goals of these cryptic predators and how these relate to migration patterns will give insights into what drives human-shark conflict and how we can best protect this species," said Dr Gabriel Machovsky-Capuska, an adjunct Senior Research Fellow at the Charles Perkins Centre and a co-author of the study.

Mr Grainger said: "White sharks have a varied diet. As well as east Australian salmon, we found evidence of other bony fish including eels, whiting, mullet and wrasses. We found that rays were also an important dietary component, including small bottom-dwelling stingrays and electric rays.

"Eagle rays are also hunted, although this can be difficult for the sharks given how fast the rays can swim."

The study found that based on abundance, the sharks' diet relied mostly on:

- Pelagic, or mid-water ocean swimming fish, such as Australian salmon: 32.2%

- Bottom-dwelling fish, such as stargazers, sole or flathead: 17.4%

The remainder was unidentified fish or less abundant prey. Mr Grainger said that marine mammals, other sharks and cephalopods (squid and cuttlefish) were eaten less frequently.

"The hunting of bigger prey, including other sharks and marine mammals such as dolphin, is not likely to happen until the sharks reach about 2.2 metres in length," Mr Grainger said.

The scientists also found that larger sharks tended to have a diet that was higher in fat, likely due to their high energy needs for migration.

"This fits with a lot of other research we've done showing that wild animals, including predators, select diets precisely balanced to meet their nutrient needs," said co-author Professor David Raubenheimer, Chair of Nutritional Ecology in the School of Life and Environmental Sciences.

Tracking of white sharks shows that they migrate seasonally along Australia's east coast from southern Queensland to northern Tasmania, and the range of movement increases with age.

Protecting this species and safely managing its interactions with humans is a priority for scientists and the NSW Department of Primary Industries.

"This study will give us a lot of information to assist in this management process," Dr Peddemors said.

DOWNLOAD the research plus video and photos of great white sharks at this link.

VIEW/EMBED an interview from NSW DPI with Richard Grainger about his research at this link.

The University of Sydney 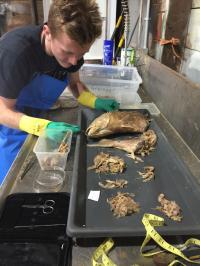