The world's oceans may be turning acidic faster today from human carbon emissions than they did during four major extinctions in the last 300 million years, when natural pulses of carbon sent global temperatures soaring, says a new study in Science. The study is the first of its kind to survey the geologic record for evidence of ocean acidification over this vast time period.

"What we're doing today really stands out," said lead author Bärbel Hönisch, a paleoceanographer at Columbia University's Lamont-Doherty Earth Observatory. "We know that life during past ocean acidification events was not wiped out—new species evolved to replace those that died off. But if industrial carbon emissions continue at the current pace, we may lose organisms we care about—coral reefs, oysters, salmon."

The oceans act like a sponge to draw down excess carbon dioxide from the air; the gas reacts with seawater to form carbonic acid, which over time is neutralized by fossil carbonate shells on the seafloor. But if CO2 goes into the oceans too quickly, it can deplete the carbonate ions that corals, mollusks and some plankton need for reef and shell-building.

That is what is happening now. In a review of hundreds of paleoceanographic studies, a team of researchers from five countries found evidence for only one period in the last 300 million years when the oceans changed even remotely as fast as today: the Paleocene-Eocene Thermal Maximum, or PETM, some 56 million years ago. In the early 1990s, scientists extracting sediments from the seafloor off Antarctica found a layer of mud from this period wedged between thick deposits of white plankton fossils. In a span of about 5,000 years, they estimated, a mysterious surge of carbon doubled atmospheric concentrations, pushed average global temperatures up by about 6 degrees C, and dramatically changed the ecological landscape.

The result: carbonate plankton shells littering the seafloor dissolved, leaving the brown layer of mud. As many as half of all species of benthic foraminifers, a group of single-celled organisms that live at the ocean bottom, went extinct, suggesting that organisms higher in the food chain may have also disappeared, said study co-author Ellen Thomas, a paleoceanographer at Yale University who was on that pivotal Antarctic cruise. "It's really unusual that you lose more than 5 to 10 percent of species over less than 20,000 years," she said. "It's usually on the order of a few percent over a million years." During this time, scientists estimate, ocean pH—a measure of acidity--may have fallen as much as 0.45 units. (As pH falls, acidity rises.)

In the last hundred years, atmospheric CO2 has risen about 30 percent, to 393 parts per million, and ocean pH has fallen by 0.1 unit, to 8.1--an acidification rate at least 10 times faster than 56 million years ago, says Hönisch. The Intergovernmental Panel on Climate Change predicts that pH may fall another 0.3 units by the end of the century, to 7.8, raising the possibility that we may soon see ocean changes similar to those observed during the PETM.

More catastrophic events have shaken earth before, but perhaps not as quickly. The study finds two other times of potential ocean acidification: the extinctions triggered by massive volcanism at the end of the Permian and Triassic eras, about 252 million and 201 million years ago respectively. But the authors caution that the timing and chemical changes of these events is less certain. Because most ocean sediments older than 180 million years have been recycled back into the deep earth, scientists have fewer records to work with.

During the end of the Permian, about 252 million years ago, massive volcanic eruptions in present-day Russia led to a rise in atmospheric carbon, and the extinction of 96 percent of marine life. Scientists have found evidence for ocean dead zones and the survival of organisms able to withstand carbonate-poor seawater and high blood-carbon levels, but so far they have been unable to reconstruct changes in ocean pH or carbonate.

At the end of the Triassic, about 201 million years ago, a second burst of mass volcanism doubled atmospheric carbon. Coral reefs collapsed and many sea creatures vanished. Noting that tropical species fared the worst, some scientists question if global warming rather than ocean acidification was the main killer at this time.

The effects of ocean acidification today are overshadowed for now by other problems, ranging from sewage pollution and hotter summer temperatures that threaten corals with disease and bleaching. However, scientists trying to isolate the effects of acidic water in the lab have shown that lower pH levels can harm a range of marine life, from reef and shell-building organisms to the tiny snails favored by salmon. In a recent study, scientists from Stony Brook University found that the larvae of bay scallops and hard clams grow best at pre-industrial pH levels, while their shells corrode at the levels projected for 2100. Off the U.S. Pacific Northwest, the death of oyster larvae has recently been linked to the upwelling of acidic water there.

In parts of the ocean acidified by underwater volcanoes venting carbon dioxide, scientists have seen alarming signs of what the oceans could be like by 2100. In a 2011 study of coral reefs off Papua New Guinea, scientists writing in the journal Nature Climate Change found that when pH dropped to 7.8, reef diversity declined by as much as 40 percent. Other studies have found that clownfish larvae raised in the lab lose their ability to sniff out predators and find their way home when pH drops below 7.8.

"It's not a problem that can be quickly reversed," said Christopher Langdon, a biological oceanographer at the University of Miami who co-authored the study on Papua New Guinea reefs. "Once a species goes extinct it's gone forever. We're playing a very dangerous game."

It may take decades before ocean acidification's effect on marine life shows itself. Until then, the past is a good way to foresee the future, says Richard Feely, an oceanographer at the National Oceanic and Atmospheric Administration who was not involved in the study. "These studies give you a sense of the timing involved in past ocean acidification events—they did not happen quickly," he said. "The decisions we make over the next few decades could have significant implications on a geologic timescale."

The study was funded by the U.S. National Science Foundation. 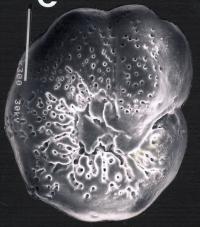