Two Canadian scientists have undertaken the challenging task to bring up to date the catalogues written by one of the most passionate collectors of beetles, Coleoptera, in the 19th century, Pierre Dejean. Dr. Yves Bousquet and Dr. Patrice Bouchard, who work with the Canadian National Collection of Insects, Arachnids and Nematodes, have now produced a pioneering detailed review of the important nomenclatural and taxonomic data in these rich publications. Two articles analyzing the Coleoptera genera in the second (1833) and third (1836) catalogues of Dejean's collection were published in the latest special issue of the open access journal ZooKeys.

Pierre François Marie Auguste Dejean was born in 1780 at Amiens, north of Paris. By the age of 13, he was already interested in entomology, collecting mainly butterflies and moths, Lepidoptera. His passion for beetle collection came shortly after these first steps, and Dejean decided to devote himself to the study of Coleoptera. By the age of 15, Dejean enrolled in the army and despite his following successful career as an officer and a politician, the most important legacy of his life was marked by his inextinguishable passion for collecting beetles.

On the battlefields around Europe during Napoleon's time and while in exile in the Austrian Empire after his fall, Dejean was a restless and fearless collector of new specimens. His youngest daughter describes the intensity of her father's passion in the preface of one of her poetry books: "He recounted himself that during the battle he stopped his horse to attach a small insect to his helmet and then carried on forward to combat". After his return to Paris in 1818, Dejean was rich and respected as were all the generals that served under Napoleon. He financed several collecting expeditions, and also bought a number of collections. Before his death in 1845, his collection contained a remarkable 24,643 species and more than 118,000 specimens, at the time the largest personal beetle collection in the world!

In total Dejean published four catalogues of the beetles in his collection, the first one was never officially published and presents no great interest for biologists as it does not provide any new scientific names. In contrast, the other three catalogues are important for nomenclature, since many new genus-group names were made available for the first time by the inclusion of at least one species name made available previously. Despite the fact that Dejean's catalogues have been heavily cited since their publication, the genus-group names in those catalogues were often given the status of nomina nuda, since they lacked formal descriptions. The objective of this new review is to provide a detailed nomenclatural summary of all generic names included in the catalogues and thus to clear any confusion around the use of Dejean's names in the biological literature.

"While working on a number of catalogues in the past, it became clear to us that the generic names in Dejean's second and third catalogues had been a source of confusion." explain Dr. Bousquet and Dr. Bouchard. "While experts of some groups in Coleoptera had consistently applied the rules of nomenclature to deal with these names, genera in other groups were often misused or had been completely ignored. In an effort to standardize and stabilize the usage of genus-group names in Coleoptera as a whole, we decided to provide a detailed analysis of all generic names included in Dejean's catalogues. Amongst other findings, our research revealed a number of new synonymies and also showed that several names available in Dejean's catalogues are in fact older than currently accepted ones."

Reviewing the work of 1 of the greatest beetle collectors: Napoleon's General Dejean 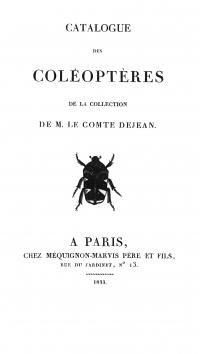