(Santa Barbara, Calif.) –– It's been more than 50 years since scientists discovered that the single-celled organism Tetrahymena thermophila has seven sexes. But in all that time, they've never known how each cell's sex, or "mating type," is determined.

By identifying Tetrahymena's long-unknown mating-type genes, a team of UC Santa Barbara biologists, with research colleagues at the Institute of Hydrobiology of the Chinese Academy of Sciences, and at the J. Craig Venter Institute, also uncovered the unusual process of DNA rearrangements required for sex determination in this organism. The discovery has potential human health implications ranging from tissue transplantation to cancer treatment, including allorecognition –– the ability of an organism to distinguish its own tissues from those of another –– which can be a first line of defense against infection and illness.

The findings are published today in the journal PLOS Biology.

"We were surprised every day in this study," said Marcella D. Cervantes, a postdoctoral researcher in UCSB's Department of Molecular, Cellular, and Developmental Biology (MCDB), and first author of the study. "It's never what we think. We would never have guessed a gene pair would be required in this process."

In the paper, "Selecting One of Several Mating Types through Gene Segment Joining and Deletion in Tetrahymena thermophila," the scientists show that in this multi-sexed, single-celled organism, the sex of the progeny is randomly determined by site-specific recombination events that assemble one complete gene pair and delete all others.

"We found a pair of genes that have a specific sequence which is different for each mating type," said Eduardo Orias, a research professor emeritus and part of a UCSB team that also included project scientist Eileen P. Hamilton, of MCDB, and Michael J. Lawson, a doctoral candidate in biomolecular science and engineering. "They are very similar genes –– clearly related to one another, going back probably to a common ancestor –– but they have become different. And each is different in a specific way that determines the mating type of the cell."

Each unicellular Tetrahymena boasts two nuclei: the germline nucleus and the somatic nucleus. Genetic information for progeny cells is stored in the former, a sort-of reservoir genome analogous to ovaries or testes in humans; genes are expressed in the latter, the "working" nucleus.

The germline nucleus contains a tandem array of similarly organized but incomplete gene pairs –– one for each mating type. (Although Tetrahymena have seven sexes, the particular cell line used in this study has just six.)

Sex of progeny cells is determined during mating, when fertilization results in a new germline and somatic nucleus that are made using contributions from the germline nuclei of both parents. In the new somatic nucleus, a complete gene pair is assembled when DNA segments from opposite ends of that tandem array are fused to one incomplete pair, and all the other pairs –– or potential pairs, as it were –– are excised, leaving the new cell with one gene pair, and one mating type.

These programmed, site-specific genome rearrangements, occurring at opposite ends of the selected gene pair, are "highly reliable and precise," explained Orias, who has been studying Tetrahymena for more than 50 years. They're also predictable –– to a point. That recombination, as it's known, will occur is certain; in fact, it must, the scientists said. Yet the exact outcome of that process is somewhat counterintuitive.

"The mating type of the 'parents' has no influence whatsoever on the sex of the progeny," Orias said. "It's completely random, as if they had a roulette wheel with six numbers and wherever the marble ends up is what they get. By chance, they may have the same mating type as the parents –– but it's only by chance. It's a fascinating system."

Given that Tetrahymena is a model organism –– similar enough to higher organisms to inform study of even human biological processes –– the discovery of said system could one day pave the way for important applications.

"By understanding this process better in Tetrahymena, what we learn ultimately may be of use in medicine," Orias said. "Tetrahymena has about as many genes as the human genome. For thousands of those genes you can recognize the sequence similarity to corresponding genes in the human genome with same biological function. That's what makes it a valuable organism to investigate important biological questions." 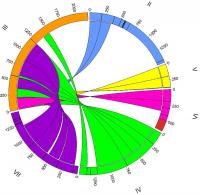