Passage graves are mysterious barrows from the Stone Age. New research from the Niels Bohr Institute at the University of Copenhagen indicates that the Stone Age graves' orientation in the landscape could have an astronomical explanation. The Danish passage graves are most likely oriented according to the path of the full moon, perhaps even according to the full moon immediately before a lunar eclipse. The results are published in the scientific journal Acta Archaeologica.

Claus Clausen, who graduated as astronomer from the Niels Bohr Institute, has also always been interested in archeology. There are many Stone Age graves in Denmark, where archaeologists estimate that around 40.000 large stone graves were built from around 3500 to 3000 BC. Only about 500 of the large passage graves, called giant tombs (in Danish Jaettestuer) are preserved today, but one of the great mysteries is their orientation in the landscape.

With the help of GPS, a compass and a surveying instrument Claus Clausen measured the orientation of entrance tunnels of approximately 100 passage graves. It turned out that there was a remarkable concentration of certain orientations. Claus Clausen had a theory that it could be a calendar system, but the theory did not hold up. Astronomer and supervisor of the special project, Per Kjærgaard Rasmussen suggested that he look at the connection between the sun and the moon and especially lunar eclipses, because there were two orientations that occurred frequently and that could suggest something with specific full moons.

Astronomer Ole Einicke, who for many years has calculated data for the Danish Almanac, had made a computer program that could calculate the position of the planets for the next year. The program was now used to calculate back in time. Directions to the rise of the Sun are easy to calculate. The orientation of the rise of full moon and the timing of lunar eclipses are more difficult to calculate due to the sun's disturping influence on the moon's orbit around the earth, that results in the orbit of the moon rotates in a period of 18.6 years. But the biggest complication is that the earth's rotation has changed through time so that it now rotates slower than before so it required special calculations and corrections to calculate more than 5.500 years into the past and see whether the lunar eclipses could be seen from Denmark.

Patterns in the sun and moon

The calculations show, that in the period from 3.300 to 3.100 BC there was an over frequency of 50 percent in the number of lunar eclipses that could be seen in Denmark. And the exciting thing was that the pattern indicated that it could fit with the rise of the full moon immediately before a lunar eclipse.

The passage graves had been used for burials and the orientation of the entrance is concentrated towards the full moon points to a ritual practice that involved the moon.

Passage graves from an astronomical perspective 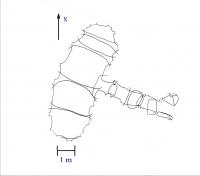 The Layout of a Typical Passage Grave