BOULDER -- Groundbreaking work by a group of Boulder scientists has been recognized this month with one of the world's most prestigious awards for innovations related to water resources.

The research team, from the University Corporation for Atmospheric Research (UCAR), the University of Colorado Boulder (CU Boulder), and the National Oceanic and Atmospheric Administration (NOAA), has worked for the past five years to develop a way to use GPS technology to measure soil moisture, snow depth, and vegetation water content.

The work has won a 2014 Creativity Prize from the Prince Sultan Bin Abdulaziz International Prize for Water.

"It's an honor to be recognized by the broader international science community," said UCAR scientist John Braun, a GPS expert and member of the research team. "This work can significantly improve how we measure changes in a number of key components of the water cycle."

Braun and his colleagues—Kristine Larson and Eric Small at CU Boulder and Valery Zavorotny at NOAA's Earth System Research Laboratory—won the prize for developing a new observational technique that takes advantage of data from high-precision GPS stations. Although GPS instruments at these stations were installed for other purposes (by geoscientists to measure plate tectonic motions and by surveyors to measure land boundaries), the Boulder research group was able to isolate GPS signals that reflected near the instruments' antennas to produce daily measurements of soil moisture, vegetation water content, and snow depth. The group named the technique GPS Interferometric Reflectometry (GPS-IR).

Because there are currently over 10,000 such GPS stations operating around the world, the extension of this method to even a subset of these sites would significantly enhance the ability to measure the water cycle.

Currently, the team uses the GPS-IR technique to analyze data streams from existing GPS networks within the western United States. Scientists and government agencies can use their data products, available at the research team's web portal, to improve monitoring and forecasting of hydrologic variables.

"The GPS-based estimates represent a larger sampling area than traditional point measurements gathered in the field," said Small, a professor in CU Boulder's Department of Geological Sciences. "This provides information that is particularly useful for applications such as tracking the amount of water stored in mountain snow pack."

The research has been funded by the National Science Foundation and NASA.

GPS-IR is based on reflected signals, which are a source of errors that have plagued the primary users of GPS technology since its inception.

"I spent almost five years of my career trying to make reflected signals go away so that I could produce better estimates of tectonic and volcanic deformation," said Larson, a professor in CU Boulder's Department of Aerospace Engineering Sciences and leader of the research team. "One of the great things about Boulder is that once we had the idea to turn this error source into something useful, we were able to put together a great interdisciplinary research team from CU, NOAA, and UCAR to work on it."

Larson will accept the award at a ceremony in Riyadh, Saudi Arabia, on December 1.

The Prince Sultan Bin Abdulaziz International Prize for Water aims to give recognition to the efforts that scientists, inventors, and research organizations around the world are making in water-related fields. The prizes acknowledge exceptional and innovative work that contributes to the sustainable availability of potable water and the alleviation of the escalating global problem of water scarcity. The 2014 Creativity Prize, worth $266,000, was split between the Boulder-based GPS-IR group and scientists at Princeton University studying drought.

"We're grateful that the ingenuity of these scientists is being recognized," said UCAR president Thomas Bogdan. "This project is a great example of a creative team turning information that would otherwise be discarded into useful data that can benefit society."

Several Colorado researchers have been recognized with the International Prize for Water since its inception in 2004. Previous winners include:

The University Corporation for Atmospheric Research is a nonprofit consortium of more than 100 colleges and universities offering degrees in the atmospheric and related sciences. Any opinions, findings and conclusions, or recommendations expressed in this publication are those of the author(s) and do not necessarily reflect the views of the National Science Foundation.

For more on this year's awards from the Council for the Prince Sultan Bin Abdulaziz International Prize for Water: 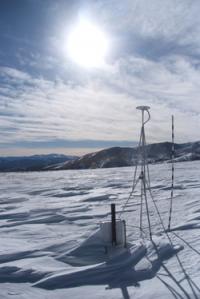