“Voting machines must remain secure throughout their entire service lifetime, and this study demonstrates how a relatively new programming technique can be used to take control of a voting machine that was designed to resist takeover, but that did not anticipate this new kind of malicious programming,” said Hovav Shacham, a professor of computer science at UC San Diego’s Jacobs School of Engineering and an author on the new study presented on August 10, 2009 at the 2009 Electronic Voting Technology Workshop / Workshop on Trustworthy Elections (EVT/WOTE 2009), the premier academic forum for voting security research.

In 2007, Shacham first described return-oriented programming, which is a powerful systems security exploit that generates malicious behavior by combining short snippets of benign code already present in the system.

The new study demonstrates that return-oriented programming can be used to execute vote-stealing computations by taking control of a voting machine designed to prevent code injection. Shacham and UC San Diego computer science Ph.D. student Stephen Checkoway collaborated with researchers from Princeton University and the University of Michigan on this project.

“With this work, we hope to encourage further public dialog regarding what voting technologies can best ensure secure elections and what stop gap measures should be adopted if less than optimal systems are still in use,” said J. Alex Halderman, an electrical engineering and computer science professor at the University of Michigan.

The computer scientists had no access to the machine’s source code—or any other proprietary information—when designing the demonstration attack. By using just the information that would be available to anyone who bought or stole a voting machine, the researchers addressed a common criticism made against voting security researchers: that they enjoy unrealistic access to the systems they study.

“Based on our understanding of security and computer technology, it looks like paper-based elections are the way to go. Probably the best approach would involve fast optical scanners reading paper ballots. These kinds of paper-based systems are amenable to statistical audits, which is something the election security research community is shifting to,” said Shacham.

“You can actually run a modern and efficient election on paper that does not look like the Florida 2000 Presidential election,” said Shacham. “If you are using electronic voting machines, you need to have a separate paper record at the very least.”

Last year, Shacham, Halderman and others authored a paper entitled “You Go to Elections with the Voting System You have: Stop-Gap Mitigations for Deployed Voting Systems” that was presented at the 2008 Electronic Voting Technology Workshop.” http://cseweb.ucsd.edu/~hovav/papers/hrsw08.html

“This research shows that voting machines must be secure even against attacks that were not yet invented when the machines were designed and sold. Preventing not-yet-discovered attacks requires an extraordinary level of security engineering, or the use of safeguards such as voter-verified paper ballots,” said Edward Felten, an author on the new study; Director of the Center for Information Technology Policy; and Professor of Computer Science and Public Affairs at Princeton University.

To take over the voting machine, the computer scientists found a flaw in its software that could be exploited with return-oriented programming. But before they could find a flaw in the software, they had to reverse engineer the machine’s software and its hardware—without the benefit of source code.

It soon became clear to the researchers that the voting machine had been designed to reject any injected code that might be used to take over the machine. When they learned of Shacham’s return-oriented programming approach, the UC San Diego computer scientists were invited to take over the project. Stephen Checkoway, the computer science Ph.D. student at UC San Diego, did the bulk of the reverse engineering of the voting machine’s software. He deciphered the software by reading the machine’s read-only memory.

The computer scientists crafted a demonstration attack using return-oriented programming that successfully took control of the reverse engineered software and hardware and changed vote totals. Next, Shacham and Checkoway flew to Princeton and proved that their demonstration attack worked on the actual voting machine, and not just the simulated version that the computer scientists built.

When poll workers enter in the morning, they normally turn this type of voting machine on. At this point, the exploit would make the machine appear to turn back on, even though it was never actually turned off.

“We overwrote the computer’s memory and state so it does what we want it to do, but if you shut off the machine and reboot from ROM, the exploit is gone and the machine returns to its original behavior,” explained Checkoway.

The computer scientists tested a machine that is very similar to machines that are used today in New Jersey and Louisiana. These New Jersey and Louisiana machines may have corrected the specific vulnerabilities the computer scientists exploited, but they have the same architectural limitations. The researchers highlight the possibility that current voting machines will be vulnerable to return-oriented programming attacks similar to the attack demonstrated in this study.

“This work shows how difficult it is to design voting machines that will remain secure over time. It’s impossible to anticipate what new kinds of attacks will be discovered in the future,” said Halderman.

Watch a five minute video demonstration of the project at: http://www.jacobsschool.ucsd.edu/news/news_video/play.sfe?id=41 or http://www.youtube.com/watch?v=lsfG3KPrD1I

County by county information on voting machines is available, via Verified Voting.org at: http://www.verifiedvoting.org/verifier/searched.php?model%5B%5D=AVC+Advantage&rowspp=20000 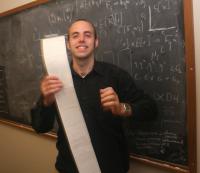