(Santa Barbara, Calif.) –– The discovery of nine new planets challenges the reigning theory of the formation of planets, according to new observations by astronomers. Two of the astronomers involved in the discoveries are based at the UC Santa Barbara-affiliated Las Cumbres Observatory Global Telescope Network (LCOGT), based in Goleta, Calif., near UCSB.

Unlike the planets in our solar system, two of the newly discovered planets are orbiting in the opposite direction to the rotation of their host star. This, along with a recent study of other exoplanets, upsets the primary theory of how planets are formed. There is a preponderance of these planets with their orbital spin going opposite to that of their parent star. They are called exoplanets because they are located outside of our solar system.

These and other related discoveries are being presented at the UK National Astronomy Meeting in Glasgow, Scotland, this week. This is the first public mention of the new planets and the research will be described in upcoming scientific journal articles.

"Planet evolution theorists now have to explain how so many planets came to be orbiting like this," said Tim Lister, a project scientist at LCOGT. Lister leads a major part of the observational campaigns along with Rachel Street of LCOGT, Andrew Cameron of the University of St. Andrews in Scotland, and Didier Queloz, of the Geneva Observatory in Switzerland.

Data from LCOGT was instrumental in confirming the new planet discoveries. By adding these nine new "transiting" planets, the number of known transiting planets has grown from 71 to 80. A transit occurs when a celestial body passes in front of its host star and blocks some of the star's light. This type of eclipse causes a small drop in the apparent brightness of the star and enables the planet's mass, diameter, density, and temperature to be deduced.

After the initial detection of the new exoplanets by the Wide Angle Search for Planets (WASP), the team of astronomers combined data from LCOGT's 2.0-meter Faulkes Telescopes in Hawaii and Australia with follow-up from other telescopes to confirm the discoveries and characterize the planets.

The planets are revolving around nearby stars in our galaxy within 1,000 light years of our sun. Their stars are located in the constellations Pegasus, Virgo, Pisces, and Andromeda in the northern hemisphere, and Eridanus, Hydra, Cetus, and Phoenix in the southern hemisphere.

The nine planets are called "Hot Jupiters." These planets are giant gas planets that orbit close to their star. In the 15 years since the first Hot Jupiters were discovered, their origin has been a puzzle. Because they are both large and close, they are easier to detect from their gravitational effect on their stars, and more likely to transit the disk of the star. Most of the first exoplanets discovered were of this type.

The cores of giant planets are thought to form from a mix of rock and ice particles found only in the cold outer reaches of planetary systems. Hot Jupiters, therefore, must form far from their star and subsequently migrate inwards over the course of a few million years. Many astronomers believed this could happen due to gravitational interactions with the disk of dust from which they formed, which might have also subsequently formed Earth-like rocky planets. However, these new results suggest that this may not be the whole story, because it does not explain how planets end up orbiting in a direction contrary that of the disk.

According to the research team, the best alternative migration theory suggests that the proximity of Hot Jupiters to their stars is not due to interactions with the dust disk at all, but to a slower evolution involving a gravitational tug-of-war with more distant planetary or stellar companions over hundreds of millions of years. Bounced onto a tilted and elongated orbit, a wandering gas giant would suffer tidal friction every time it swung close to the star, eventually becoming parked in a near circular, but randomly tilted orbit close to the star. "In this scenario, smaller planets in orbits similar to Earth's are unlikely to survive," said Rachel Street.

Las Cumbres Observatory Global Telescope Network is a non-profit organization dedicated to building a worldwide network of robotically controlled telescopes, which will enable astronomers to observe 24 hours a day, from both hemispheres. Currently, LCOGT operates two 2.0-meter telescopes: Faulkes North in Maui, Hawaii, and Faulkes South in New South Wales, Australia. LCOGT also has a telescope in Sedgwick Reserve, a nature reserve in Central California funded and managed by UC and UCSB. Over the course of the next few years, an armada of telescopes will be commissioned, distributed over six sites in both hemispheres of the globe, all controlled from LCOGT's headquarters in Goleta, Calif. These new facilities will be one of the largest networks of telescopes in the world, and will be an unprecedented tool for exploring the dynamic nature of a range of astrophysical phenomena. LCOGT's flexible approach to scheduling means the network provides responsive and highly efficient follow-up for large-scale surveys such as WASP. LCOGT is affiliated with neighboring UC Santa Barbara.

Gallery of Exoplanets with Retrograde Orbits 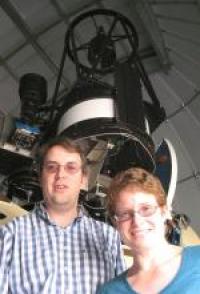