Although insect larvae may seem harmless to humans, they can be extremely dangerous to the plant species that many of them feed on, and some of those plant species are important as agricultural crops. Although plants cannot simply flee from danger like animals typically would, many have nonetheless evolved ingenious strategies to defend themselves from herbivores. Herbivorous insect larvae will commonly use their mouths to smear various digestive proteins onto plants that they want to eat, and when plants detect chemicals commonly found in these oral secretions, they can respond to the injury by producing defensive molecules, including proteins and specialized metabolites, of their own that inactivate the insect's digestive proteins and thus prevent the insect from obtaining nutrients from the plant.

Of course, the existence of such chemical defense mechanisms in plants is a problem, which herbivorous insects must counter. One way that insects have evolved to overcome these problems is by forming partnerships with bacteria. For example, the digestive oral secretions of the Colorado potato beetle (Leptinotarsa decemlineata) include bacteria that can suppress the defense mechanisms of the tomato plants that the beetle commonly feeds on. The beetle and the bacteria have thus achieved "symbiosis," which is a term that biologists use to describe a mutually beneficial partnership: the beetle provides the bacteria with a comfortable environment inside its mouth and other secretory organs, and the bacteria help the beetle consume nutrients from tomato plants.

To Prof. Gen-ichiro Arimura of Tokyo University of Science, this is a fascinating result: "Although it is well known that symbiotic microorganisms in animals (especially bacteria in the intestines of herbivores such as pandas and cows) affect biological activities such as digestion and reproduction, the fact that they affect the prey (i.e., the plants) is not so well known." In other words, the fact that the insect's bacterial partners work to alter biochemical processes within the living plant before it is eaten is a matter of considerable interest to scientists.

Prof. Arimura and his research team, in collaboration with Okayama University, wondered whether such partnerships with bacteria may apply in the case of the insect Spodoptera litura, the larvae of which are major pests that commonly damage crops in Asia. In an article recently published in the journal New Phytologist, Prof. Arimura's research team experimented with applying the oral secretions of S. litura larvae to mechanically damaged leaves of the thale cress plant (Arabidopsis thaliana). When the researchers sterilized the oral secretions to kill or remove any bacteria that may be present in them, they found that applying these secretions to the plant leaves stimulated the expression of defense-related genes and the production of oxylipins that play important roles in defending A. thaliana cells from digestion. However, when the researchers applied oral secretions that had not been sterilized, the bacteria present within the oral secretions acted to prevent the expression of defense-related genes and the production of oxylipins. In contrast, the bacteria stimulated the production of salicylic acid and abscisic acid, two chemicals that act to suppress the production of oxylipins.

These findings are compelling evidence that bacteria in the oral secretions of S. litura assist the larvae in overcoming plant defense mechanisms, and the researchers wanted to identify the bacteria responsible. Tests of the larvae's oral secretions revealed the presence of a bacterium called Staphylococcus epidermidis, and further experiments confirmed the S. epidermidis acted to suppress plant defense mechanisms.

These results provide important insights into how S. litura counteracts the defense mechanisms of the plants that it feeds on, and Prof. Arimura hopes that knowing more about the relationship between the larvae and the bacteria will help crop scientists develop techniques to protect important crop species from S. litura. Such techniques may help farmers reduce their use of environmentally harmful pesticides, and Prof. Arimura expresses optimism that his research will thus "contribute to the creation of a safe and secure food supply and a rich environment."

About Professor Gen-ichiro Arimura from Tokyo University of Science

Dr Gen-ichiro Arimura is a Professor at the Department of Biological Science and Technology within the Faculty of Advanced Engineering at Tokyo University of Science (TUS), Japan. After completing his postgraduate education at the Hiroshima University Graduate School, he worked in the field of plant biology for several years before moving to TUS in 2013. A senior and well-respected researcher, he has more than 110 publications to his credit. His key research interests include plant biotechnology, ecology, and biochemistry.

This work was funded by the Japan Society for the Promotion of Science and the Japanese Ministry of Education, Culture, Sports, Science and Technology.

Partners in crime: Agricultural pest that relies on bacteria to overcome plant defenses 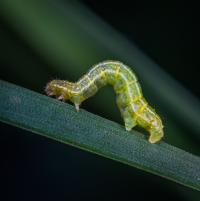