3D bioprinted algae can be harnessed as a sustainable source of oxygen for human cells in engineered vascularized tissues, researchers report November 18 in the journal Matter. They embedded the bioprinted photosynthetic algae, along with human liver-derived cells, in a 3D hydrogel matrix to create honeycomb-shaped tissues with lobules, similar to the human liver. In the future, the researchers say, the eco-friendly, cost-effective 3D bioprinting approach may hold potential for applications such as disease modeling, drug development, regenerative and personalized medicine, and even food engineering.

"The study is the first true example of symbiotic tissue engineering combining plant cells and human cells in a physiologically meaningful way, using 3D bioprinting," says senior study author Y. Shrike Zhang (@shrikezhang) a bioengineer at Harvard Medical School and Brigham and Women's Hospital. "Our study provides a unique example of how we can harness the symbiotic strategy, very often seen in nature, to promote our ability to engineer functional human tissues."

There is an increasing demand for artificial tissues to replace those that have been damaged in order to restore organ functions, and over the past decade, 3D bioprinting techniques have been used to fabricate tissue scaffolds for biomedical and tissue engineering applications. This approach typically involves depositing a bioink onto a surface to produce 3D structures with desired architectures and shapes to recapitulate organs and tissues, including the vasculature, which plays a critical role in transporting oxygen and nutrients throughout the body. A bioink is essentially a hydrogel containing living cells, biomaterials, and other growth supplements. It mimics the extracellular matrix of the desired tissue and supports the growth of the embedded cells.

Despite advances in the fabrication of 3D tissues, the main limitation has been maintaining sufficient oxygen levels throughout the engineered tissue to promote cell survival, growth, and functioning. Researchers have tried to address this problem by incorporating oxygen-releasing biomaterials, but these typically do not work long enough and are sometimes toxic to cells because they produce molecules such as hydrogen peroxide or other reactive oxygen species. "A method to enable sustained release of oxygen from within the engineered tissues is in urgent demand," Zhang says.

To meet this demand, Zhang and his colleagues developed an algae-based 3D bioprinting method to incorporate vascular patterns within engineered tissues and provide a sustainable source of oxygen for human cells in the tissues. Specifically, they used photosynthetic single-celled green algae called Chlamydomonas reinhardtii. This symbiotic strategy also benefits the algae, whose growth is partially supported by carbon dioxide released by the surrounding human cells.

The first step involved 3D bioprinting the algae. The researchers encapsulated C. reinhardtii in a bioink composed primarily of cellulose--the main structural component of plants, algae, and fungi. The bioink was loaded into a syringe fitted with a needle, and extrusion bioprinting was performed using a bioprinter.

Next, the researchers embedded both the bioprinted algae and human liver-derived cells in a 3D hydrogel matrix. The bioprinted C. reinhardtii released oxygen in a photosynthetic manner and enhanced the viability and functions of the human cells, which grew to a high density and produced liver-specific proteins. "High cell densities in engineered vascularized human tissues were difficult to obtain before," Zhang says.

Finally, the researchers used the enzyme cellulase to degrade the cellulose-based bioink, then filled the hollow microchannels left behind with human vascular cells to create vascular networks in the liver-like tissue. "Development of such a fugitive bioink that allows initial oxygenation and subsequent vessel formation within a single tissue construct has not been reported before," Zhang says. "This a critical step toward successful engineering of viable and functional tissues."

In the end, the 3D vascularized, oxygenized engineered tissues hold potential for future implantation to achieve tissue regeneration in humans. These tissues could also be used for drug screening and development, studying disease mechanisms, and possibly personalized medicine if patient-specific cells are used.

Another potential application of the 3D bioprinting technology is food engineering. Microalgae represent a rich source of protein, carbohydrates, polyunsaturated fatty acids, carotenoids, vitamins, and essential minerals. These bioactive compounds could be incorporated into innovative, cultured food products to enhance their nutritional value and promote health.

But in the meantime, more effort is needed to optimize the method. For example, the culture media could be improved to facilitate the growth of both C. reinhardtii and human cells, and light conditions could be tuned to optimize oxygen supply from the algae. Moreover, detailed studies on biosafety, toxicity, and immuno-compatibility of the algae will be important for clinical translation in the future. "This technology cannot be immediately put to human uses," Zhang says. "It is still proof-of-concept and will require significant follow-up studies to translate."

This work was supported by the National Institutes of Health, the National Science Foundation, and the New England Anti-Vivisection Society. 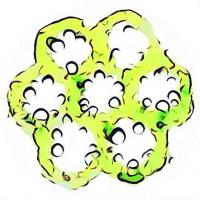