A group of biophysicists from Moscow Institute of Physics and Technology (MIPT) and their international colleagues have studied the crystallization of molecules of the membrane protein bacteriorhodopsin. The scientists have demonstrated that the larger crystals of the protein grow by "consuming" smaller crystals around them and creating "depletion zone" around themselves. The paper has been published in the scientific journal Crystal Growth & Design.

What are membrane proteins?

Membrane proteins are an important group of proteins that are present in any living organism. They are found on the surface of cell membranes (or even penetrate through them), and perform a number of different functions, mainly associated with receiving signals or transporting substances (the membrane itself is impermeable to many molecules).

For example, membrane proteins participate in signal transduction through nerve cells by restoring their condition after a nerve impulse has passed through, or reacting to adrenaline, causing the cells of our bodies to work harder under stress.

Why do we need their crystals?

In order to gain a better understanding of how proteins function, it is very important to know their molecular structure. It determines the way in which a protein interacts with other molecules (e.g. adrenaline). If we know the structure of a protein, computer methods can be used to accurately select molecules that will interact with the protein. This will make it cheaper and faster to develop drugs - more than 60% of drugs use membrane proteins as a target.

In order to determine the structure of a protein, the scientists first grow crystals of its molecules, then examine them under X-ray radiation and use the diffraction pattern to restore the structure of the protein - when arranged in a regular crystal lattice, all the atoms in a molecule greatly increase the radiation in particular directions, which enables scientists to precisely determine the location of the atoms.

How are the crystals obtained?

Two conditions are required to obtain protein crystals. Firstly, it must be "more favourable" for the protein molecules to be in a crystal, rather than a solution. This is relatively simple to achieve - all that needs to be done is to select the right components of the solution and their concentrations. Secondly, the protein molecules have to be allowed to move freely in the solution, so that new molecules are able to bind to the growing crystal.

If the protein is soluble, it is relatively simple to fulfil both of these conditions. However, if the protein is not soluble in water (this applies to all membrane proteins - their native environment is not a liquid, but a lipid membrane), then this can cause problems.

Even if it is possible to remove the protein from its membrane and allow it move around freely in the solution, it will simply lose its shape when it comes into contact with the different environment (it is said that the protein becomes denatured). When this happens, it will of course no longer be possible to obtain any information about its "native" structure. In order to allow a protein molecule to move freely in a solution without losing its structure, scientists use a special environment - a lipidic cubic phase.

The lipidic cubic phase (LCP) is a special three-dimensional structure formed by certain lipids (molecules that make up lipid membranes) at certain temperatures and in certain concentrations. In a solution, the cubic phase forms a complex two-dimensional surface along which membrane proteins are able to reach the growing crystal without leaving the comfort of their membrane.

It is similar to the way in which people walk in a park - despite the fact that paths (one-dimensional) are not all over the park, they can be used to get to almost any point in the two-dimensional park. It is the same in this case; the only difference is that the surface of the cubic phase, which represents the "paths" for the membrane proteins, is two-dimensional, and the "park" is three-dimensional (the entire space).

Using this structure, proteins are able to "travel" through a solution and provide new molecules for a growing crystal without leaving the comfort of their environment - the lipid membrane.

It should be noted that the use of such a complex technique to obtain crystals has already demonstrated positive results. Out of all of the structures of membrane proteins that are currently known, crystals for obtaining 40% of them were made by crystallization in the lipidic cubic phase (or, as scientists call it, in meso crystallization).

What did the authors of the paper do?

In their paper, the authors studied the growth of crystals of bacteriorhodopsin (which was used as a model protein of any membrane protein) using fluorescence microscopy. Over the course of a month, the scientists observed the growth of the crystals and examined how the distribution of bacteriorhodopsin in the sample changed over time. It turned out that at the beginning the crystals formed throughout the sample fairly evenly, however, after about a week clear depletion zones began to form around the faster growing crystals. In these zones there were only few small crystals, and the larger crystals were found only beyond these zones. It was found that the larger growing crystals not only take material from the solution in order to grow, but they "consume" their smaller counterparts that are close by.

In addition, the scientists discovered that crystallization does not start at random points in the sample, but along the boundaries of areas in the shape of a honeycomb.

"This pattern may have something to do with the fact that the cubic phase is not uniform throughout the sample, but forms small domains with boundaries where the likelihood of crystallization is greatest. It would appear that we have been able to observe these domains that, for an unknown reason, form "honeycomb" shapes. However, what is interesting is that if we learn how to control the size of these domains, we will be able to grow larger crystals, and consequently develop better and more accurate protein structures," commented Dr. Valentin Borshchevskiy, the main author of the paper and head of the Super-resolution microscopy group at the Research center of molecular mechanisms of aging and age-related diseases of MIPT.

According to data from the California Biomedical Research Organisation, the development of a completely new drug takes, on average, 12 years and will cost a company about 2.6 billion dollars. An understanding of how drug targets are structured (in 40% of cases they are GPCR membrane proteins) will, in the future, make it cheaper and faster to find drug molecules that act on them. It will also make it possible to develop drugs that act strictly on one type of receptor, which will reduce a drug's side effects.

The study was conducted with the support of the Russian Science Foundation. 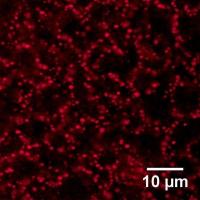 Enlarged Image of a Sample