One of the first clues pathologists look for in tissue from a newly diagnosed breast cancer patient is the estrogen receptor, a nuclear protein that converts hormonal messages in the bloodstream into instructions for the cell about how to behave. They also look for the presence of progesterone receptors, primarily to confirm that the estrogen receptor is active.

In the June 24 issue of Science Advances, however, researchers radically upgrade the significance of the progesterone receptor. They show that when exposed to estrogens and progestins, these receptor proteins interact with different sets of binding sites in the cell's chromosomes, with the progesterone receptor dramatically altering how estrogen receptors interact with the cell's DNA.

"In the last year or two, researchers have tuned into the extensive and previously unrecognized cross talk between the progesterone and estrogen receptors," said study author Geoffrey Greene, PhD, the Virginia and D. K. Ludwig Professor and Chairman of the Ben May Department for Cancer Research at the University of Chicago. "We now know that this relationship can be better understood and potentially exploited."

"This observation is important," he added, "because more than two-thirds of breast cancers contain both estrogen and progesterone receptors."

Previous studies from many labs, including a group at Cambridge University, showed that when exposed to the primary female sex hormone, estradiol, the estrogen receptor activates genes that encourage tumor cells to grow and divide. "In this setting, the cancer cells grow faster," Greene said. "They divide faster and they live longer, which helps the breast cancer progress to a more advanced state."

"Our study, as well as that of the Cambridge group, showed that when progesterone or a progestin is added, it changes the landscape in the nucleus," Greene said. "It opens up a whole new set of binding sites for the estrogen receptor that now work in conjunction with the progesterone receptor." This combination inhibits cellular proliferation, cell survival and pathways involved in metastasis.

"Our data further suggest that, despite the historical bias toward the effects of estrogen on the estrogen receptor, it's the progesterone receptor that dominantly controls estrogen receptor activity when both receptors are present and activated."

In their Science Advances paper, Greene, lead author Hari Singhal, now a postdoctoral scholar at Harvard University, and colleagues took a step further. Building on the well-established use of tamoxifen, an estrogen antagonist, to treat women with estrogen receptor-positive breast cancers, they decided to inhibit the activities of both receptors with antagonists to see if there would be an added benefit of combining two receptor-selective drugs. Using a well-established ER+/PR+ human breast cancer model (T47D) implanted in immune-compromised mice, they tested their theory in four groups of mice.

Significantly, the combination of tamoxifen and CDB4124 caused tumors to shrink. "Virtually full regression was observed in a subset of mice," Singhal said. By day 60, the average tumor volume in mice treated with tamoxifen plus CDB4124 was 70 percent lower than the original tumors.

"These findings," the authors note, "emphasize the clinical value of assessing both progesterone receptor and estrogen receptor expression in breast cancer samples." Not only is the progesterone receptor an "essential modulator of estrogen-receptor-regulated genes," but it also significantly contributes to the "prognostic value of estrogen receptors in ER+/PR+ breast cancers." In addition, it might serve as an important combinatorial target in these breast cancers. 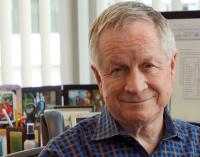