Mitochondria generate most of a cell's energy, and mutations in mitochondrial DNA can result in serious health problems including developmental delays, seizures, dementia, heart failure, liver dysfunction, vision loss, deafness, and premature death. Although mitochondrial replacement therapy to prevent these conditions has not been approved by the US Food and Drug Administration, it has been approved in the United Kingdom, and the National Academies of Sciences, Engineering, and Medicine recently concluded it is ethically permissible to conduct clinical investigations in the United States.

In the new study, Egli and his collaborators examined the reproducibility and consistency of the nuclear transfer procedure. Using healthy human egg cells, the researchers transferred the nuclear genome of an "original" egg cell into an unfertilized "donated" egg cell. Half of the resulting cell lines contained a low percentage of mitochondrial DNA from the original egg cell, not just the donated egg cell.

This research was supported by the New York Stem Cell Foundation (NYSCF) and the Bernard and Anne Spitzer Fund. 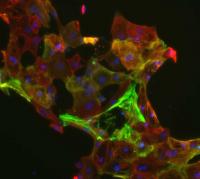