Scientists at the University of California San Diego and Sapphire Energy have successfully completed the first outdoor field trial sanctioned by the U.S. Environmental Protection Agency for genetically engineered algae.

In a series of experiments funded by the U.S. Department of Energy, the researchers tested a genetically engineered strain of algae in outdoor ponds under real-world conditions. As reported in the journal Algal Research, the researchers conclude that genetically engineered algae can be successfully cultivated outdoors while maintaining engineered traits, and, most importantly, without adversely impacting native algae populations.

"Just as agricultural experts for decades have used targeted genetic engineering to produce robust food crops that provide human food security, this study is the first step to demonstrate that we can do the same with genetically engineered algae," said Stephen Mayfield, a professor of biology and an algae geneticist at UC San Diego.

Under the EPA's purview over a 50-day experiment, the scientists cultured strains of the algae species Acutodesmus dimorphus--genetically engineered with genes for fatty acid biosynthesis and green fluorescent protein expression--in parallel with non-engineered algal species. Testing both algae strains in water samples taken from five regional lakes showed strikingly similar levels of growth in the tests, and that the genetic modification did not change the impact of the cultivated strains on native algae communities.

"This study showed the framework for how this type of testing can be done in the future," said study coauthor Jonathan Shurin, an ecologist in UC San Diego's Division of Biological Sciences. "If we are going to maintain our standard of living in the future we are going to need sustainable food and energy, and ways of making those that do not disrupt the environment. Molecular biology and biotechnology are powerful tools to help us achieve that. Our experiment was a first-step towards an evidence-based evaluation of genetically engineered algae and their benefits and environmental risks."

"Progress made in the lab means little if you can't reproduce the phenotype in a production setting," said Shawn Szyjka, the study's lead author, formerly of Sapphire Energy.

Future testing will include additional gene types in experiments that run several months, allowing the researchers to further evaluate influences from weather, seasonal shifts and other environmental factors.

"Algae biomass can address many needs that are key to a sustainable future," said Mayfield, director of the California Center for Algae Biotechnology and the Food and Fuel for the 21st Century initiative. "This is the first of many studies testing this technology in field settings."

In addition to Mayfield, Shurin and Szyjka, coauthors of the study include: Briana Tyler, Christopher Yohn and Yan Poon of Sapphire Energy Inc.; and Shovon Mandal, Nathan Schoepp, Steven Villareal and Michael Burkart of UC San Diego. Note: Stephen Mayfield was a founder of Sapphire Energy but presently has no affiliation with the company. 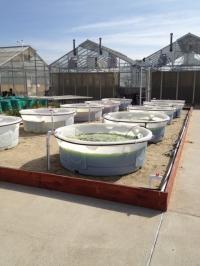 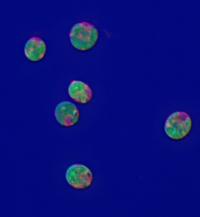