From earthquakes in Nepal to volcanic eruptions in Chile, from meteors crashing to Earth to the songs of migrating whales in the Indian Ocean, The Global Ear hears all.

This universal system of looking, listening and sniffing the Earth is the work of an international organization, the Comprehensive Nuclear-Test-Ban Treaty Organization or CTBTO.

The CTBTO designed and began installing its monitoring network 18 years ago to detect nuclear explosions above ground and underneath. The network is a way to guard against test ban treaty violations. The Comprehensive Nuclear-Test-Ban Treaty (CTBT) bans nuclear explosions by everyone, everywhere -- in the atmosphere, underwater and underground.

The network has demonstrated it can do what it was designed to do -- to detect nuclear tests with great reliability. For example, on February 12, 2013, 94 of the network's seismic monitoring stations and two of its infrasound stations detected and alerted member states to a nuclear detonation more than an hour before North Korea announced it had conducted a test.

'The CTBTO's International Monitoring System has found a wider mission than its creators ever foresaw: monitoring an active and evolving Earth,' says Lassina Zerbo, Ph.D., executive secretary of CTBTO. 'Some compare the system to a combined giant Earth stethoscope and sniffer that looks, listens, feels and sniffs for planetary irregularities.

For example, on February 15, 2013, the CTBTO's infrasound monitoring stations detected signals made by a meteor that had entered the atmosphere and disintegrated in the skies over Chelyabinsk, Russia. The CTBTO network -- the only global one of its kind to detect infrasound -- recorded the shock wave caused by the exploding fireball. That data helped scientists to locate the meteor, measure the energy release, its altitude and size.

Another example: the system's atmospheric sampling tracked the invisible plume of radioactivity from the March 2011 Fukushima Daiichi nuclear power plant disaster, as it spread around the globe. It showed that radioactivity outside of Japan was below harmful levels. That knowledge helped public safety officials around the world understand what course of action to take.

'It is the only global network which detects atmospheric radioactivity and sound waves which humans cannot hear,' explains Zerbo.

Scientists, governments, non-governmental organizations and universities have discovered that the massive amounts of data collected by the network have a myriad of uses and benefits.

To access the data, the CTBTO has created a Virtual Data Exploitation Centre. It provides scientists and researchers from many different disciplines with data for research and enables them to publish new findings: http://www.ctbto.org/specials/vdec

Every two years the CTBTO hosts a scientific and technical conference in Vienna. This year some 1,000 scientists and researchers will gather to share their experience and knowledge and to learn from each other how to use the data. This year's CTBT Science and Technology conference will be held from June 22-26 at the Hofburg Palace, Vienna, Austria.

Besides the CTBT Science and Technology Conferences, the CTBTO and others support workshops and technical meetings where scientists have the opportunity to meet and exchange knowledge and information.

The CTBTO's global monitoring network now comprises 300 stations, some in the most remote and inaccessible areas of the Earth and sea. The network captures four types of data: seismic, hydroacoustic, infrasound and radionuclide. It is about 90 percent complete. When finished, the system will have 337 stations placed globally to monitor every corner of the planet effectively.

Currently, the network collects some 15 gigabytes of data daily, which it sends in real-time to the CTBTO's data analysis centre in Vienna, Austria. From there, a daily analysis report is sent to the CTBTO's 183 Member States for their own use and analysis.

'The International Monitoring System is a fantastic tool for monitoring the planet's core, atmosphere, oceans, or environment,' explains Raymond Jeanloz, Ph.D., professor of geophysics and astronomy at the University of California, Berkeley.

'The CTBTO data give us a glimpse of the Earth's deep interior -what's happening there and how it evolved over Earth's history,' says Professor Miaki Ishii,Ph.D., Department of Earth and Planetary Sciences, Harvard University.

'The global data are extremely valuable because they span decades, are high quality and highly calibrated,' says Randy Bell, director of the CTBTO's International Data Centre. 'The data can be used to analyse local, regional or global events.'

Bell says that his primary job is to look for nuclear tests, but allowing the data to be used for science gets more experts looking at the data. 'What may be noise to me might be a signal to someone else,' he says.

A wealth of scientific insights

Scientists now mining the trove of CTBTO data accumulated over the past 18 years are gaining new insights into everything from the interior structure of the Earth to learning about atmospheric disturbances and the role they play in changing weather patterns.

For example, the number of seismic events recorded and analysed at the CTBTO's International Data Centre varies depending on the amount of activity around the world. On a typical day, the centre analyses over 30,000 seismic signals to identify about 130 seismic events that meet stringent criteria. Some events are measured at only a few stations while other events are detected around the globe. Seismic and acoustic waves travel at different speeds and along different paths so analysing the various signals helps pinpoint the time, location and intensity of the recorded events.

'Beyond nuclear monitoring, we need to understand all kinds of seismic events, which pays off in improving earthquake, fault and tectonic monitoring,' says Bell. 'It also has improved our understanding of the Earth itself.'

Though many countries have their own seismic monitoring systems, the CTBTO's monitors are global, permanent, calibrated and the data are shared equally.

'One of the key merits of the CTBTO system is that it has a set of fixed stations which provide a stable monitoring baseline,' says Paul Richards, Ph.D., a seismologist at Columbia University. 'That stability is useful.'

'For Sub-Saharan Africa, the CTBTO's seismic network is instrumental for monitoring and providing data about seismicity in the region,' says Gerhard Graham, Ph.D., former chief operating officer of the Council for Geoscience, South Africa, and the current Coordinator of the CTBTO's International Data Centre.

'The waveform data are used to augment bulletins in Eastern and Southern Africa. The data greatly enhance the accuracy to locate earthquakes in the region. In 2006 in Mozambique, for example, CTBTO data were used to accurately pinpoint the epicentre of a 7.0 magnitude quake. That's important information to help us understand seismic hazards and to know how best to design and build future sensitive structures such as schools and hospitals,' says Graham.

The role of infrasound

The CTBTO monitors infrasound - sound waves at frequencies too low to be detected by the human ear -- with 48 stations. Four more are under construction and another eight are planned.

Twenty of the CTBTO's infrasound monitoring stations detected signals made by a meteor that had entered the atmosphere and disintegrated in the skies over Chelyabinsk, Russia on February 15, 2013.

Fifteen stations recorded the meteor that exploded over Sulawesi, Indonesia, in October 2009. The Chelyabinsk meteor was ten to fifty times more energetic.

The sensitivity of the CTBTO's infrasound sensors helps scientist to gauge the number of meteorites burning in the atmosphere; many of these airbursts would otherwise go unnoticed.

Correlating infrasound and other observations of meteors is giving scientists a better understanding of the populations of Near Earth Objects and insights into the process that leads to the formation of the solar system.

The ability of the system to track atmospheric disturbances, whether volcanic eruptions, severe storms or other large scale turbulence, provides a way to improve weather forecasts and, by using nearly two decades of accumulated data, track climate change.

Elisabeth Blanc, Ph.D., Research Director at France's Atomic Energy and Alternative Energies Commission, heads a European project to improve long-term weather forecasting models based on temperature and wind changes in the stratosphere, using some of the CTBTO's infrasound data.

'If our research confirms the effects of these kinds of changes, weather models could forecast ahead by several weeks or even a season. That would be very important, but we are not there yet.'

With its continuous monitoring of underwater sounds, the CTBTO's network of 11 underwater listening posts adds another dimension to the network. Located deep in some of the world's most remote waters, these hydroacoustic stations listen to earthquakes in the Andes Mountains and around the northern Pacific. The data from the CTBTO's hydroacoustic as well as seismic stations are used for tsunami warnings.

These stations also detect and track chunks of breaking icebergs and the migration of whales.

'The data are a treasure trove for those studying marine mammals,' says Mark Prior, Ph.D., a former CTBTO staff member now with the Netherlands Organization for Applied Scientific Research. 'The main thing limiting use of the data is our imagination,' he says.

Some researchers are using the data to track the migratory habits of a particular species of Blue Whale that resides in the Indian Ocean but is also seen in Alaska. Such studies help researchers estimate the densities and size of the whale population.

The system could also help determine the time and location of large aircraft impacts and explosions. In the case of Malaysia Airlines flight MH370, which is believed to have crashed into the ocean, Australian and U.S. researchers are still examining the data for clues of the airliner's fate.

Every day, the International Data Centre analyses over a thousand atmospheric radiation spectra from around the globe to detect minute traces of rare isotopes that might indicate nuclear activity. The ability to track radioactive particles and noble gases, especially xenon, a gas emitted in nuclear explosions, adds another dimension to the network. Forty of the 80 radioactive nuclide detecting stations will be equipped to detect noble gases, including xenon, which are difficult to contain underground after a below-the-surface nuclear test. These gases are not washed out of the atmosphere by precipitation.

'CTBTO monitoring has detected surprising amounts of xenon,' explains Gerhard Wotawa, Ph.D., a senior meteorologist with the Central Institute for Meteorology and Geodynamics in Austria. 'The source is not nuclear power plants or nuclear tests as first suspected, but the production of medical radioisotopes, a discovery that has prompted a search for ways to limit the emissions and reduce the global levels of radioactivity. Only a few facilities manufacture these isotopes, but stopping them is not an option. If we stop production, we would run out of cancer treatments,' he says.

Since the issue came to light, the CTBTO has joined forces with 10 medical isotope production companies, which have vowed to reduce emissions or bring xenon emissions to zero.

'The nations of the world have invested about U.S. $1 billion to create The Global Ear,' says Zerbo. 'Every year they continue their investment, hoping it will never have to be used for its intended purpose of detecting a violation of the Nuclear-Test-Ban Treaty. Civil and scientific spinoffs show the world immediate payback and in turn increase support for the Treaty.

'As more scientists and organizations make use of the data, the value has become ever more apparent,' says Zerbo. 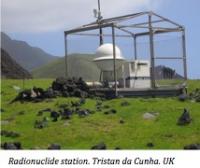 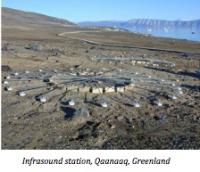