ST. LOUIS, MO – OCTOBER 8, 2014 – What could the natural diversity and beauty of plant leaves have in common with one of mankind's greatest creative inventions, the violin? Much more than you might imagine.

"There are many parallels between leaves and violins," says Dan Chitwood, Ph.D., assistant member, Donald Danforth Plant Science Center in St. Louis, Missouri. "Both have beautiful shapes that are potentially functional, change over time, or result from mimicry. Shape is information that can tell us a story. Just as evolutionary changes in leaf shape inform us about mechanisms that ultimately determine plant morphology, the analysis of cultural innovations, such as violins, gives us a glimpse into the historical forces shaping our lives and creativity."

As a plant biologist, Chitwood spends most of his time exploring genetic and molecular mechanisms underlying diversity in plant morphology, or in layman's terms, understanding how leaf shapes are formed and what that means for a plant to grow and thrive. He also studies how leaf shapes change as plant species evolve to adapt in different environments. Research into why a desert-adapted tomato species can survive with little water, for example, sheds light on how leaf architecture affects the efficiency of plant water use.

Chitwood's research involves the tools of "morphometrics", which can be used to quantify traits of evolutionary significance. Changes in shape over time provide insight into an object's function or evolutionary relationships. A major objective of morphometrics is to statistically test hypotheses about the factors that affect shape.

But his love of music, and his talent playing the viola, led Chitwood to ask how musical instruments, particularly those designed by masters, evolved over time. Could shapes of violins tell us something about the function of the instrument, or about which violin makers (luthiers) borrowed ideas from others? Could the factors influencing violin evolution be analyzed and understood using the same morphometric approaches used to understand evolution of natural species?

Violin shapes have been in flux since the design and production of the first instruments in 16th century Italy. Numerous innovations have improved the acoustical properties and playability of violins. Although the coarse shape of violins is integral to their design, details of the body outline can vary without significantly compromising sound quality.

Chitwood compiled data on the body shapes of more than 9,000 violins from over 400 years of design history using iconography data from auction houses. The dataset encompasses the most highly desirable violins, and those of historical importance, including violins designed by Giovanni Paolo Maggini, Giuseppe Guarneri del Gesù, and Antonio Stradivari, as well as Stradivari copyists Nicolas Lupot, Vincenzo Panormo, and Jean-Baptiste Vuillaume. The results of Chitwood's research were published in the article, "Imitation, genetic lineages, and time influenced the morphological evolution of the violin," in the October 8th edition of the journal, PLOS ONE.

Chitwood found that specific shape attributes differentiate the instruments, and these details strongly correlate with historical time. His linear discriminant analysis reveals luthiers who likely copied the outlines of their instruments from others, which historical accounts corroborate. Clustering images of averaged violin shapes places luthiers into four major groups, demonstrating a handful of discrete shapes predominate in most instruments.

As it turns out, genetics also played a role in violin making. Violin shapes originating from multi-generational luthier families tend to cluster together, and familial origin is a significant explanatory factor of violin shape. Together, the analysis of four centuries of violin shapes demonstrates not only the influence of history and time leading to the modern violin, but widespread imitation and the transmission of design by human relatedness.

As with all scientific papers, Chitwood's article was rigorously peer-reviewed, in this case, by some of the world's leading morphometrics experts. The critiques prior to publication led to improvements in the morphometric techniques used in the final analyses. Chitwood is now applying his improved methods to his plant research program at the Donald Danforth Plant Science Center.

"This is a fantastic example of how advances in one field can help advance a seemingly unrelated field," said Chitwood. "I'll be a happy scientist and musician if by understanding violin evolution this helps lead to improved crop plants that are more productive and sustainable."

Founded in 1998, the Donald Danforth Plant Science Center is a not-for-profit research institute with a mission to improve the human condition through plant science. Research aims to feed the hungry and improve human health, preserve and renew the environment and position the St. Louis region as a world center for plant science. The Center's work is funded through competitive grants and contract revenue from many sources, including the National Institutes of Health, U.S. Department of Energy, National Science Foundation, U.S. Department of Agriculture, U.S. Agency for International Development, the Bill & Melinda Gates and Howard G. Buffett Foundations. To keep up to date with Danforth Center's current operations and areas of research, please visit, http://www.danforthcenter.org, featuring information on Center scientists, news, and the "Roots & Shoots" blog. Follow us on Twitter at @DanforthCenter. 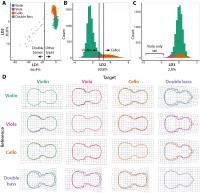