Since 2016, Casadesus Smith, professor of biological sciences in the College of Arts and Sciences, has received more than $2.7 million in funding from the National Institutes of Health (NIH) to study the causes of Alzheimer's and identify models for better pharmacological treatments.

A new two-year, $224,500 project, titled "Characterization of transcriptome changes in diet-induced progression to METS/T2D to identify earliest and sex-specific neurodegenerative foci for AD development," allows her to pursue answers to some important questions that have arisen during those studies.

"We know that diabetes and obesity are related to Alzheimer's disease - diabetes is the number one risk factor other than age - and we know that if we look at an Alzheimer's brain, we'll see changes in insulin receptors, but we don't understand how that transition occurs," Casadesus Smith said.

Using data and material from her ongoing study of a drug designed to prevent formation of amylin plaques - one suspected contributing factor to Alzheimer's development - Casadesus Smith will use gene sequencing technology to better understand the differences in Alzheimer's progression in males and females, and identify genetic changes from the earliest point of metabolic dysfunction to the onset of Alzheimer's.

Her ongoing studies with rodent models have shown a clear link between a high-fat diet and earlier appearance of Alzheimer's markers in the brain. Working with Helen Piontkivska, Ph.D., associate professor of biological sciences who specializes in bioinformatics and medical genomics, especially large-scale analysis of genomic sequences, Casadesus Smith will run brain tissue samples through RNA sequencing to show changes in each individual gene at each stage of transition.

"We will be able to identify the transcriptional targets within the brain that change early on in states of metabolic stress, and by looking at those, it may give us an idea of early foci that link diseases of metabolism such as diabetes to Alzheimer's disease development," she said.

Casadesus Smith said she is hopeful the short study will yield enough data to advance to a larger funded project.

"We're going to be able to piece together the transcriptional changes with what we see in the brain, in terms of pathology and metabolism," she said. "Hopefully we will be able to identify specific proteins or receptors or changes that then can be looked at in a larger study and pursued in a hypothesis-based manner."

Gemma Casadesus Smith, Ph.D. (right), professor of biological sciences at Kent State University, works with a student in her lab. 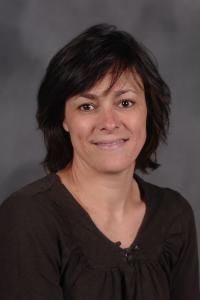