Understanding the ecology and distributions of species in Amazonia is hampered by lack of information about environmental conditions, such as soils. Plant occurrence data are typically more abundant than soil samples in poorly known areas, and researchers from Finland and Brazil have now developed a method that uses both plant and soil data to produce a map of soil properties.

Amazonia is a vast rainforest area that is both megadiverse and poorly known. Field measurements of environmental factors, such as soils, are few and far between, so maps depicting habitat characteristics that are relevant for plants and animals suffer from low accuracy.

To overcome this problem, researchers from the University of Turku in Finland and the National Institute of Amazonian Research (INPA) and the Federal University of Alagoas (UFAL) in Brazil decided to take advantage of plant occurrence data in addition to soil data.

"These results are also relevant in the context of global warming: species need to track climatically suitable areas, but they will only be able to establish if also soils are suitable. Information about soils is needed to identify and protect the suitable areas of both the present and the future," says Postdoctoral Researcher Juliana Stropp from UFAL.

Already for a long time, the Amazon research team of the University of Turku has been collecting field data on ferns to utilise them as indicators of soil and forest types in Amazonia.

"Thanks to perseverance in the work, we now have the field information needed to convert fern species occurrence data to an estimate of soil properties," says Professor of Plant Ecology Hanna Tuomisto, leader of the Amazon research team of the University of Turku.

Generations of botanists have made expeditions to Amazonia and brought back plant specimens that are deposited in herbaria all over the world. With GBIF and other online portals, the data are now easily accessible.

"Therefore, we thought that perhaps we can use these haphazard fern occurrences to derive estimates of soil properties, put them together with the actually measured soil data, and produce a new soil map," says Postdoctoral Researcher Gabriela Zuquim from the University of Turku, who led the study.

The researchers' plan worked. The mapping was based on 2,600 soil sampling points and more than 30,000 fern records from digital databases. In a nutshell, the method consists of five steps: compiling the available data, determining soil optima for the species, estimating soil properties for sites that have plant occurrence records but no soil data, interpolating between all soil data points, and validating the map. Validation using an independent set of soil samples suggested that the map is accurate enough to be used as a digital layer in species distribution and habitat modeling. 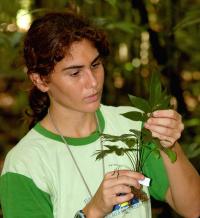