Hotter and drier El Niño events are having an alarming effect on biodiversity in the Amazon Rainforest and further add to a disturbing global insect collapse, scientists show.

A new study focusing on the humble, but ecologically key, dung beetle has revealed for the first time that intense droughts and wildfires during the last El Niño climate phenomenon, combined with human disturbance, led to beetle numbers falling by more than half - with effects lasting for at least two years.

Although the El Niño of 2015-16 captured less attention than the deforestation fires of 2019, it delivered a very significant drought and, in combination with human activities such as agriculture and deforestation, contributed to mega wildfires that burned more than 3 million hectares of Amazon forests, including a million hectares in just one region.

The effects of droughts and wildfires on Amazonia's trees have been studied for decades, but researchers were less clear about the impacts on fauna and the role they have in ecosystem functioning.

Dung beetles are key for spreading nutrients and seeds, and they are important indicator insects used to gauge the overall health of an ecosystem.

An international team of scientists from the UK, Brazil and New Zealand counted more than 14,000 dung beetles from 98 species across 30 forest plots in the Brazilian state of Pará, within the Amazon, through several surveys conducted between 2010 and 2017. They also monitored how much dung was removed and how many seeds were dispersed by dung beetles.

Human disturbance, through activities such as deforestation and predatory logging, significantly increases the flammability of the forests - as forest fires do not occur naturally in the Amazon.

All surveyed forests saw beetle numbers fall, though the results also show that forests that burned had fewer beetles than those areas that had just experienced drought.

"Our investigation provides important insights into how human activities and climate extremes can act together and affect tropical forest biodiversity and ecosystem functioning," said lead researcher Dr Filipe França from the Lancaster Environment Centre at Lancaster University and associate researcher at Embrapa Amazônia Oriental in Brazil.

He also said that "The loss of these hardworking beetles could indicate a wider problem that many mammals living in the forest may have also succumbed to the drought and fires. Dung beetles depend on mammal's poo for nesting and feeding, therefore declining in beetles are likely associated with the loss of mammals due to that El Niño drought and fires."

Previous research has shown that mammal presence has a large influence on dung beetles.

The loss of beetles may indicate other animals were lost, but also raises concerns that forest regeneration will be negatively affected after extreme drought and fire events.

"We found far fewer dung beetles after the El Niño event, and those that survived were struggling to do their work of spreading nutrients and seeds in forests already impacted either by drought alone or in areas that also experienced fires", explained Professor Rodrigo Fadini from the Federal University of Western Pará in Brazil.

Taken together, the research findings suggest that human activities can interact with climate extremes in different ways and that, combined or not, these disturbances can threat the delicate balance of tropical forest fauna, including insects, and their key contribution to ecosystem processes.

Professor Jos Barlow from the Federal University of Lavras in Brazil and Lancaster University, said: "Tropical forests around the globe are increasingly threatened by anthropogenic climate change, local human disturbances and more frequent and severe weather extremes. We need actions to mitigate the ongoing climate and biodiversity crisis if we want to keep the forest biodiversity and its contribution to people for future generations."

The study is detailed in the paper 'El Niño impacts on human-modified tropical forests: consequences for dung beetle diversity and associated ecological processes' which has been published today by the journal Biotropica. 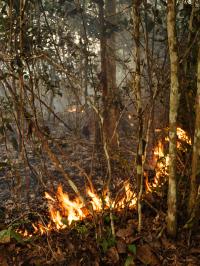