During the warmer months, the air surrounding California's rivers and streams is alive with the flapping of wings and chirping of birds. But once the buzz and breeding of spring and summer are over, these riparian areas grow quiet. Sometimes it seems as though there are hardly any birds there at all.

Not so, according to a study from the UC Davis Department of Wildlife, Fish and Conservation Biology.

Researchers examined bird diversity in the lower Cosumnes River and lower Putah Creek watersheds in the Central Valley between 2004 and 2012. They found that just as many bird species used the riparian habitats in the winter as in the summer, and genetic diversity was actually higher in the winter than during summer months.

It turns out that while many birds headed south for the winter to tropical habitats, birds that breed in the boreal forest of Canada flew in to take their place. These "neotemperate migrants," as the researchers call them, include birds such as the yellow-rumped warbler, white-crowned sparrow, fox sparrow, cedar waxwing, and varied thrush.

"You might have to look harder, but there are just as many species there," said lead author Kristen Dybala, a UC Davis postdoctoral student at the time of the study and currently a research ecologist with Point Blue Conservation Science. "We found strong evidence that Central Valley ecosystems are very important in supporting bird populations throughout the year."

This study highlights the need to protect and restore riparian habitats to support birds throughout their annual life cycle--not just during the breeding times of spring and summer. Often neglected in conservation planning, wintering habitat can be key to a songbird's survival, affecting its reproductive success, migration timing, and overall health.

"Habitat conservation and restoration doesn't just benefit breeding birds, but also supports continental populations of boreal breeding songbirds that require winter habitat for the half of their life spent not on breeding grounds," said co-author Andrew Engilis, a scientist and curator of the UC Davis Museum of Wildlife and Fish Biology. "We are sure that if similar analyses were done in other regions of the U.S., there would be similar results."

The study is published in the journal The Condor: Ornithological Applications. Melanie Truan, an ecologist with the UC Davis Museum of Wildlife and Fish Biology, was also a co-author.

The study will be available at http://bit.ly/1KvarCz. 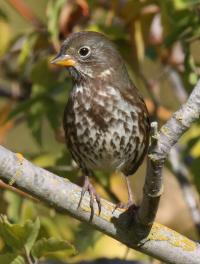