WOODS HOLE, Mass. -- Accomplishing perhaps a world first, researchers at Columbia University and the Marine Biological Laboratory (MBL) have mapped the full-body muscular activity of an animal while it was moving and behaving.

Their study adds to mounting evidence that the coordinated activity of many cells working together -- in this case, across an entire organism -- generates new functional and behavioral properties that are not present in single cells.

In the study, published this week in Current Biology, the researchers watched the patterns of muscle activity in Hydra as it bent, contracted, and elongated its tubular body and tentacles.

Building on their prior success in mapping full-body neural activity in Hydra, they pinpointed seven distinct patterns of muscle activity and discovered that individual muscle cells can participate in multiple patterns with different kinetics. In Hydra's muscular and nervous systems alike, these patterns appear to emerge from the coordination of many cells working in unison.

"The patterns of activation we identified were not implemented by specific, dedicated cells, but instead depended on the properties of the muscle tissue as a whole, and the interconnections between cells," says first author John Szymanski, a former MBL Whitman Center investigator.

According to senior author Rafael Yuste of Columbia University, who has led the Hydra Lab at the MBL as a Whitman Fellow since 2017, this study brings researchers a step closer to "breaking the neural code" and understanding the relationship between a stimulus and its neural response.

"We are now poised to do the hard job, which is to link the activity of neurons, muscle, and behavior and decipher the neural code," Yuste says, "to explain completely how the nervous system creates behavior, at least in one animal."

Hydra are freshwater organisms, only a few millimeters in length, and belong to the phylum Cnidaria, which also includes jellyfish and coral. Cnidarians split from their bilateral counterparts roughly 750 million years ago and maintain a much simpler body plan and nervous system than many of today's model organisms.

Their tubular bodies are comprised of two layers of muscle, each composed of a different cell type and separated by two nerve nets. The muscle cells generate movement by exerting force on protein fibers, which run longitudinally (from the mouth to the base of the tube foot) in one muscle layer, and circumferentially (around the horizontal axis) in the other layer. When the longitudinal fibers are pulled, the body column gets short and fat; when the circumferential ones are pulled, it gets long and skinny.

Given that the muscle fibers run perpendicular to one another, it was long thought that they held opposing roles, and that both layers of muscle cells could not be activated and pull on their respective fibers simultaneously. Although the two tissues do sometimes work independently, the researchers found that in certain instances, like longitudinal contractions, both layers of muscle are active -- possibly allowing the animal to expel the influx of water that is constantly flowing into its cells.

Each individual cell also appeared to serve more than one function, and participate in more than one activation pattern. No one cell was dedicated to a single movement. This multifunctionality makes sense, according to Szymanski, since Hydra have a limited number of cells and cell types. The muscle cells "do almost everything" and assume roles that, in most other animals, would be outsourced to other tissues.

In fact, the nerve nets appear to play a relatively limited role in movement. Neurons may initially trigger the activity, but the patterns of propagation are organized by the muscle cells themselves working in unison.

"Seeing an animal that can operate with such basic activity patterns that are self-organized by the musculature makes it easier to imagine what a pre-neural animal might have looked like," Szymanski says, "and provides a glimpse into the early evolution of the nervous system." 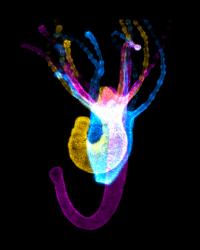