Researchers at Drexel University's C. & J. Nyheim Plasma Institute are modifying an air sterilization system they created to combat the threat of anthrax attacks post-9-11 in hopes it can now help to ward off COVID-19.

"As public health research reveals how the virus can persist and be transmitted through the air in indoor environments, it will become increasingly important for engineers to develop air sterilization technology that can neutralize or remove it," said Alexander Fridman, PhD, director of the Nyheim Plasma Institute and a professor in Drexel's College of Engineering, who is a leading National Science Foundation-supported effort to develop technology that can neutralize the novel coronavirus.

The project, supported by a $200,000 NSF grant, is one of the first to look at how to eliminate the SARS-CoV-2 virus in the environment. Due to an urgent need for technology like this to reduce the threat of transmitting the virus in indoor public spaces, like hotels, grocery stores and hospitals, the NSF is hoping to leverage preexisting decontamination technology for rapid deployment in the next six to eight months.

Fridman, who pioneered the development of cold plasma technology at the Nyheim Plasma Institute over the last two decades, suggests that its results in food and water treatment applications - and a similar expedited effort amid the anthrax scare in the early 2000s - make it a prime candidate for this new challenge.

Plasma treatment technology uses electric pulses to excite the particles in the air, creating a molecular maelstrom can be wielded to blast apart chemical contaminants and bacteria. Fridman specializes in non-thermal, or cold, plasma which, in contrast to its better-known kin lightning, does not generate heat, so it's safer to handle - and much easier to control.

A cold plasma filter designed by Fridman's team in 2010 proved to be more than 99% successful at removing anthrax spores from the air. Their prototype was scaled up by Canada's department of transportation for use on vehicles before the terrorist scare subsided.

The filter uses a grid of wires, called a dielectric barrier grating discharge system, to generate the electrical pulses necessary to produce a screen of plasma. Forcing air through the grid would theoretically be able to deactivate viral particles. With small adjustments to the geometry of their previous design, Fridman believes this could be deployed in home and industrial HVAC units.

"Air sterilization, filtration and treatment will become more of a priority as we look to reopen businesses and have people spending time in indoor public spaces," said Danil Dobrynin, PhD, associate director of the Nyheim Plasma Institute who is a co-investigator on the project. "Our technology has been very successful at neutralizing bacteria and anthrax spores in these environments. While viruses are smaller than bacteria, they are subject to some of the same structural vulnerabilities - especially coronaviruses. So we believe our technology could easily be adapted to target SARS-CoV-2 with a similar efficacy."

Fridman's team is planning to have a prototype ready for testing in the next two months. The project is part of an expanded research thrust of Drexel's Center for High Pressure Plasma Energy, Agriculture and Biomedical Technologies collaboration with George Washington University and the University of Michigan, to explore cold plasma for food, surface and air sterilization.

In addition to Fridman and Dobrynin, Alex Rabinovich, PhD; associate director of the Nyheim Plasma Institute, is also participating in this research. 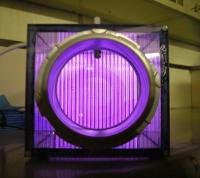