An international research project has used gene-editing technology to examine the heat tolerance of Great Barrier Reef coral with the results set to guide efforts in combatting the effects of climate change.

The study published in the journal Proceedings of the National Academy of Sciences (PNAS) involving researchers from Stanford University, the Australian Institute of Marine Science (AIMS), and Queensland University of Technology (QUT), used the CRISPR-Cas9 technique to make precise, targeted changes to the genome of coral.

Using this new technique, the research team demonstrated the importance of a particular gene on heat tolerance in the coral Acropora millepora.

"We developed an improved CRISPR-Cas9 method that allowed us to test gene function in coral for the first time." Dr Cleves said.

"As a proof-of-concept, we used CRISPR-Cas9 genome editing to understand the function of a key gene that influences the ability of coral to survive heat."

AIMS Principal Research Scientist and head of the Reef Recovery, Restoration and Adaptation Team Dr Line Bay said that the emergence in the past decade of CRISPR-Cas9 provided a powerful tool to study the genes that influence heat and bleaching tolerance in corals.

"Understanding the genetic traits of heat tolerance of corals holds the key to understanding not only how corals will respond to climate change naturally but also balancing the benefits, opportunities and risks of novel management tools such as selective breeding and movement of corals among reefs," she said.

CRISPR-Cas9 acts like a pair of genetic scissors, allowing scientists to make precise changes to the DNA of an organism which allows them to either turn off a target gene or replace it with another piece of DNA.

In this study, the researchers used CRISPR-Cas9 to turn off the Heat Shock Transcription Factor 1 gene (HSF1), which plays a crucial role in the heat response in many other organisms.

Dr Dimitri Perrin, a chief investigator with the QUT Centre for Data Science, said the use of CRISPR technology in this study had enabled an increased understanding on the fundamental biology of corals.

"By removing the gene, and then exposing the coral larvae to heat stress, we demonstrated that the modified coral larvae died whereas the unmodified larvae were unharmed under the increased temperature," Dr Perrin said.

The researchers said they were are excited for this technological advance as it paved the way towards new genetic tools and knowledge for coral which would support their management and conservation in the future.

The scientists who discovered the CRISPR-Cas 9 technique recently received the Nobel Prize for Chemistry. 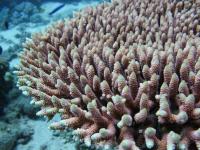 A Colony Of Acropora Millepora On the Great Barrier Reef 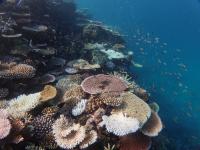