Since their invention in the 1930s, electron microscopes have helped scientists peer into the atomic structure of ordinary materials like steel, and even exotic graphene. But despite these advances, such imaging techniques cannot precisely map out the 3D atomic structure of materials in a liquid solution, such as a catalyst in a hydrogen fuel cell, or the electrolytes in your car's battery.

Now, researchers at Berkeley Lab, in collaboration with the Institute for Basic Science in South Korea, Monash University in Australia, and UC Berkeley, have developed a technique that produces atomic-scale 3D images of nanoparticles tumbling in liquid between sheets of graphene, the thinnest material possible. Their findings were reported April 2 in the journal Science.

"This is an exciting result. We can now measure atomic positions in three dimensions down to a precision six times smaller than hydrogen, the smallest atom," said study co-author Peter Ercius, a staff scientist at Berkeley Lab's Molecular Foundry.

These graphene sheets - each one just an atom thick - are "strong enough to contain tiny pockets of liquid necessary to acquire high-quality images of the nanoparticles' atomic arrangement," Ercius explained.

The researchers then adapted computer algorithms originally designed for biological studies to combine many 2D images into atomic-resolution 3D images.

The achievement, which improves upon a technique first reported in 2015, marks a significant milestone for the researchers. "With 3D SINGLE, we can determine why such small nanoparticles are more efficient catalysts than larger ones in fuel cells and hydrogen vehicles," Ercius said.

Scientists have long theorized that antiferromagnets have potential as materials for ultrafast stable memories. But no one could figure out how to manipulate their magnetization to read and write information in a memory device.

Now, a team of researchers at Berkeley Lab and UC Berkeley working in the Center for Novel Pathways to Quantum Coherence in Materials, an Energy Frontier Research Center funded by the U.S. Department of Energy, have developed an antiferromagnetic switch for computer memory and processing applications. Their findings, published in the journal Nature Materials, have implications for further miniaturizing computing devices and personal electronics without loss of performance.

Study co-authors Nityan Nair and Eran Maniv discovered that applying small pulses of electrical current rotates the spins of the antiferromagnet, which in turn switches the material's resistance from high to low.

To their surprise, they also found that "these magnetic spins can be flipped or manipulated with small applied currents, around 100 times smaller than those used in any other materials with a similar response," said Analytis.

The researchers next plan to test different antiferromagnetic TMDs in the hope of identifying a system that operates at room temperature and thus further develop the field of spin-based electronics or spintronics, where information is transported by the electrons' magnetic spin. 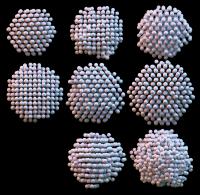 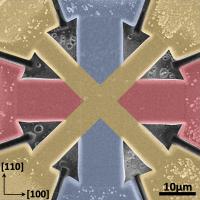