Tropical Storm Merbok formed in the South China Sea west of the Philippines on June 11 and made landfall east of Hong Kong, China on June 12. NASA measured the rainfall rates within the tropical storm early in its short two day lifetime.

The Global Precipitation Measurement mission or GPM core observatory satellite flew above Merbok on June 10, 2017 at 0631 UTC (2:31 a.m. EDT) when the tropical storm was forming. GPM's Microwave Imager (GMI) and Dual-Frequency Precipitation Radar (DPR) showed that the future tropical storm was starting to get organized. Feeder bands were shown converging into the center of the circulation located in the South China Sea west of Luzon, Philippines.

GPM passed over the western side of tropical storm Merbok again on June 12, 2017 at 0621 UTC when its maximum sustained winds were about 40 knots (46 mph/74 kph). These winds speeds are close to tropical storm Merbok's predicted maximum peak winds of about 45 knots (~52 mph/83 kph). Data collected by GPM's Microwave Imager (GMI) instrument indicated that rain was falling at a rate of over 57 millimeters (2.2 inches) per hour in one of Merbok's rain bands that was moving over southern China.

At NASA's Goddard Space Flight Center in Greenbelt, Maryland a 3-D image of the storm was created derived from GPM's radar data. The image showed the 3-D structure of rain bands within forming tropical storm Merbok on June 10, 2017. GPM's radar (DPR Ku Band) indicated that, at that time, storm tops within the rain bands west of the Philippines were only reaching heights of about 10 kilometers (6.2 miles).

JTWC issued their final warning on Merbok on June 12 at 2100 UTC (5 p.m. EDT) after the tropical storm made landfall east of Hong Kong. At that time, Merbok had maximum sustained winds near 40 knots (46 mph/74 kph) and was centered near 23.5 degrees north latitude and 114.9 degrees east longitude, about 47 nautical miles north-northeast of Hong Kong. Merbok was moving to the north at 9 knots (10 mph/~17 kph).

Continued to track further inland and is weakening due to land Interaction and moderate, northerly vertical wind shear. Although Merbok was no longer a tropical cyclone on June 13, its remnant low pressure center is expected to re-emerge into the East Sea on June 14, where the JTWC expects it to re-strengthen as an extra-tropical low pressure area. That low is then expected to track close to Okinawa, Japan late on June 14. 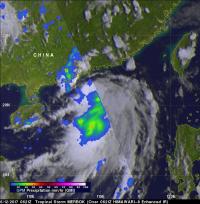