University of Chicago physicists have discovered a new class of behavior in air bubbles rising from an underwater nozzle. In this surprising behavior, the bubbles tear apart in sharp jerks instead of pinching off at a point, the research team will report in the Oct. 6 issue of the journal Physical Review Letters.

The research is helping scientists understand the mathematical explosions they encounter in the equations that govern the physics of fluids. "These are the equations of our lives," said Wendy Zhang, Assistant Professor in Physics at the University of Chicago. They govern everything from the bubbles of carbonated beverages to the venting of gas from deep oceanic fissures. They even apply to such large-scale processes such as exploding stars.

"One of the things that's nice about this field of research is that it's around you all the time," said Sidney Nagel, the Stein-Freiler Distinguished Service Professor in Physics at the University of Chicago. "It's on your tabletop and you've seen it who knows how many times. But by studying this so incredibly carefully, you get insights about things that happen on the celestial scale."

Chicago graduate student Nathan Keim and his co-authors-Zhang, Nagel, and Peder Moller, now a Ph.D. student at Ecole Normale Supérieure-documented their discovery using high-speed digital photography. Keim's experiment built on previous work that Zhang, Nagel and others published in Science in 2003. Until then, scientists believed that all fluids broke apart in much the same way. They believed that the cross-section of the pinching neck of any drop or bubble would become circular until it broke, regardless of its initial conditions.

The 2003 Science article described something different in experiments on water drops breaking up in a highly viscous oil. The article showed how the shape of the shrinking neck in a long, thin thread the drops formed depended on the initial shape of the nozzle. Drops from big nozzles detached differently than drops from small nozzles.

What Keim saw in the images from the latest experiment, taken at 130,000 frames per second, looked more like thin sheets of air tearing. "It would be almost like plastic or paper, something that you can tear. When you pulled it apart, it wouldn't snap all at once. It would tear across its breadth," Keim said.

The tilt of the nozzle also contributes to the phenomenon. The physicists observed that even a tilt of only a tenth of a degree affected the shape of the air. "We had no idea that air bubbles were sensitive to such slight tilt," Keim said. "If you were hanging a picture, 0.1 degrees off would be a great job."

Keim and his co-authors related the bubble phenomenon to a 2004 report in the Astrophysical Journal by another team of University of Chicago scientists proposing that detonations in exploding stars my arise asymmetrically. A singularity-the failure of equations that describe the behavior of fluid motion-connects the physics of stars exploding in deep space with breaking bubbles in a water tank on Earth.

In an exploding star, "you have a singularity that is off-center, that has asymmetry," Keim said. "It happens in a place where you have denser material on one side and lighter material on the other. And so this singularity has some direction to it, some asymmetry, much in the way that ours does."

Nagel said a key to the project was having Keim, an experimentalist, working daily with Zhang, a theorist, in developing the research in ways that neither could do alone. Said Keim, "It's been great having Wendy often just asking the right question at the right time, prompting me to do an experiment that otherwise I wouldn't have thought was interesting."

In their collaborations, the Chicago physicists aim to get gain a better understanding of the equations that govern fluids on Earth, gases in the heavens, and perhaps even the motion of protons and neutrons inside an atom, Nagel said.

"They're ill-behaved, and yet it's theses kinds of equations that govern the texture and form of our lives," he said. 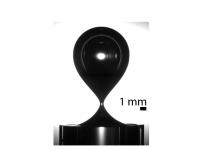