PROVIDENCE, R.I. [Brown University] -- A study provides multiple lines of new evidence that pigments and the microbodies that produce them can remain evident in a dinosaur fossil. In the journal Scientific Reports, an international team of paleontologists correlates the distinct chemical signature of animal pigment with physical evidence of melanosome organelles in the fossilized feathers of Anchiornis huxleyi, a bird-like dinosaur that died about 150 million years ago in China.

The idea that melanosomes, which produce melanin pigment, are preserved in fossils has been hotly debated among scientists during the last several years. Microscopic traces that to some scientists seem to resemble melanosomes, appear to skeptics to instead be similar-looking bacteria. The new study resolves the debate, said co-author Ryan Carney, a graduate student at Brown University, by adding a powerful second line of evidence: chemistry.

"We have integrated structural and molecular evidence that demonstrates that melanosomes do persist in the fossil record," said Carney, who helped design and write the study. "This evidence of animal-specific melanin in fossil feathers is the final nail in the coffin that shows that these microbodies are indeed melanosomes and not microbes."

The finding has important implications for the interpretation of both past and future studies on fossil color, Carney said, and substantiates prior proposals that Anchiornis had some dark black feathers.

In the new study, led by Johan Lindgren of Lund University in Sweden, the team used electron microscopes to observe what appear to be rod-like melanosome structures and imprints within the barbules of feathers all over the body.

That morphological evidence alone, however, would not advance the debate, so in addition the team performed two different kinds of chemical analyses to see if they could detect animal eumelanin pigment. They used both time-of-flight secondary ion mass spectrometry and infrared reflectance spectroscopy to discern the molecular signature of melanin in the samples. They compared those observed signatures with the signatures of modern-day animal eumelanin. The melanins were virtually identical, except for minor contributions from sulfur in the fossil, Carney said.

The researchers also analyzed the observed spectral signatures to compare them with melanins produced by various microbes, just to make sure that the pigments were not from any other source. The closest spectral agreement remained with an animal source, however.

"This is animal melanin, not microbial melanin, and it is associated with these melanosome-like structures in the fossil feathers," Carney said.

Furthermore, no other types of molecules from potential microbes were detected.

The Swedish Research Council, the Crafoord Foundation and the National Geographic Society funded the research. 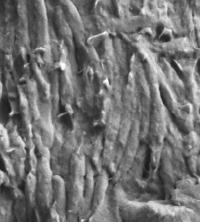 Melanosomes under the Microscope