A team of researchers from Osaka University and Leibniz Institute for Solid State and Materials Research developed the world's thinnest and lightest magnetic sensor matrix sheet system that visualizes the two-dimensional distribution of magnetism on various surfaces.

Conventional magnetic sensor circuits consist of silicon-based hard electronic elements integrated on a substrate with a hardness similar to that of glass, meaning they can be only placed on flat surfaces.

Conversely, flexible soft magnetic sensors have also been developed, but there is no device integrating a driving circuit, sensor scanning mechanism, signal processing circuit, and wireless measurement unit, all of which are required to form a system. "This is because the fabrication of a flexible magnetic sensor element is difficult. Furthermore, it is hard to integrate the fabrication process with circuit technology," explains lead author Masaya Kondo.

Now, this joint research team has developed a thin and soft ("skin-like") magnetic sensor matrix sheet system by integrating flexible electronic elements called organic transistors and giant magnetoresistive elements on a 1.5-μm-thick plastic film. This imperceptible circuit fabricated on a thin plastic film can be attached onto the skin of a person without causing discomfort and can function properly even when folded (Fig. 1).

The magnetic sensor matrix sheet system, with a sensitivity ten times higher than that of conventional systems, not only detects and amplifies weak magnetic signals, but also visualizes the two-dimensional distribution of magnetism in real time by automatically scanning magnetic sensor elements arranged in a matrix pattern (Fig. 2).

"Attaching our sheet-type sensor to a reinforced structure identifies the precise locations of damage by mapping the distortion of magnetism caused by deteriorated reinforcing steel bars. Also, once the sensitivity of the sensor is improved further, higher precision cardiac diagnosis will be achieved by magnetic mapping than by conventional electrocardiography," says Prof. Sekitani, who led the study. 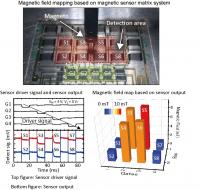