U.S., Italian and German partners in the telescope, known as the LBT, are releasing the images today. First binocular light is a milestone not only for the LBTâ€“ now the world's most powerful telescope â€“ but for astronomy itself, the partners say. The University of Arizona in Tucson is a quarter owner of telescope observing time.

The first binocular light images show three false-color renditions of the spiral galaxy NGC 2770. The galaxy is 102 million light years from our Milky Way, a relatively close neighbor. The galaxy has a flat disk of stars and glowing gas tipped slightly toward our line of sight.

The first image combines ultraviolet and green light and emphasizes the clumpy regions of newly formed hot stars in the spiral arms. The second image combines two deep red colors to highlight the smoother distribution of older, cooler stars. The third image is a composite of ultraviolet, green and deep red light and shows the detailed structure of hot, moderate and cool stars in the galaxy. The cameras and images were produced by the Large Binocular Camera team, led by Emanuele Giallongo at the Rome Astrophysical Observatory.

"To have a fully functioning binocular telescope is not only a time for celebration here at LBT, but also for the entire astronomy community," UA Steward Observatory Director, Regents' Professor and LBT Corp. President Peter A. Strittmatter said. "The images that this telescope will produce will be like none seen before. The power and clarity of this machine is in a class of its own. It will provide unmatched ability to peer into history, seeing the birth of the universe."

Regents' Professor and Steward Observatory Mirror Lab Director Roger Angel was one of the UA astronomers who conceived the basic idea for the LBT in the early 1980s. The UA Mirror Lab, world-renowned for pioneering mirror technologies, cast the LBT mirrors in its giant rotating furnace and polished them by a unique stressed-lap technique to virtual perfection. Angel was involved earlier in UA research that is developing adaptive optics technologies for giant telescopes, technologies that defeat atmospheric turbulence.

"Among astronomy projects, the LBT gives me the most satisfaction, because it is very revolutionary, and because it has given Arizona the largest and the best telescope in the world," Angel said. "When all the pieces are in place, the LBT will take images sharper than any other telescope. I think it's the most likely telescope to take the first pictures of planets around other stars because of the unique advanced technologies used to build it."

International cooperation that saw the project through to completion "is remarkable," said John P. Schaefer, chairman of the LBT Corp. board of directors and member of the Research Corp. board of directors. "The LBT project was once just an idea, and now it is the world's most advanced telescope, made possible by international collaboration of over 15 institutions. The completion of this one-of-a-kind instrument reflects what can happen when people come together and work towards a common goal."

LBT Director Richard Green said, "The amount of time and work that was put into this project to reach the point where we are today is immense. We have gone through challenging moments, but to see the telescope operational with both mirrors is a great feeling. Everyone who has worked on this, at all levels, is enormously proud of what has been accomplished."

Project builders moved the Italian-built telescope structure to Mount Graham in 2002 and moved the first mirror to the mountain in 2003. LBT staff mounted and aligned the first primary mirror in the telescope in 2004, and the second primary in 2005. Rome Observatory delivered a first panoramic (36 -megapixel) CCD camera to achieve first, single-mirror LBT light in October 2005. The camera team delivered the panoramic camera for the second mirror in November 2007.

The LBT is a collaborative effort that includes numerous astronomy and academic institutions. The partners and their ownership interest include:

http://uanews.org/system/files/images/NGC2770_YVU.jpg
This is the third of three LBT first binocular light images taken Jan. 11 and 12. It shows a false-color rendition of the spiral galaxy NGC 2770. This image is a composite of ultraviolet, green and deep red light and enhances the detailed structure of hot, moderate and cool stars in the galaxy. (Credit: Large Binocular Camera team, Rome Observatory) 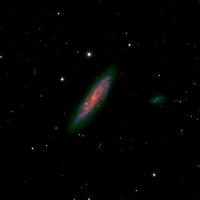 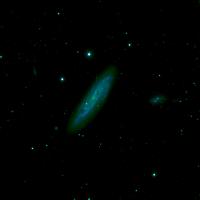