The latest issue of the journal Cell* carries an article that is likely to help solve one of the long-standing mysteries of biomedicine. In a study that challenges currently held views, researchers at the Instituto Gulbenkian de Ciência (IGC), in Portugal, unravel the molecular mechanism whereby sickle cell hemoglobin confers a survival advantage against malaria, the disease caused by Plasmodium infection. These findings, by the research team lead by Miguel P. Soares, open the way to new therapeutic interventions against malaria, a disease that continues to inflict tremendous medical, social and economic burdens to a large proportion of the human population.

Sickle cell anemia is a blood disease in which red blood cells reveal an abnormal crescent (or sickle) shape when observed under a conventional microscope. It is an inherited disorder – the first ever to be attributed to a specific genetic modification (mutation), in 1949 by Linus Pauling (two-times Nobel laureate, for Chemistry in 1954, and Peace, in 1962). The cause of sickle cell anemia was attributed unequivocally to a single base substitution in the DNA sequence of the gene encoding the beta chain of hemoglobin, the protein that carries oxygen in red blood cells.

Only those individual that inherit two copies of the sickle mutation (one from their mother and the other from their father) develop sickle cell anemia. If untreated, these individuals have a shorter than normal life expectancy and as such it would be expected that this mutation would be rare in human populations. This is however, far from being the case. Observations made during the mid-20th century and building on Pauling's findings, revealed that the sickle mutation is, in fact, highly, selected in populations from areas of the world were malaria is very frequent, with sometimes 10-40% of the population carrying this mutation.

Individuals carrying just one copy of the sickle mutation (inherited from either the father or mother) were known not to develop sickle cell anemia, leading rather normal lives. However, it was found that these same individuals, said to carry the sickle cell trait, were in fact highly protected against malaria, thus explaining the high prevalence of this mutation in geographical areas where malaria is endemic.

These findings lead to the widespread believe in the medical community that understanding the mechanism whereby sickle cell trait protects against malaria would provide critical insight into developing treatment or a possible cure for this devastating disease, responsible for over a million premature deaths in sub-Saharan Africa. Despite several decades of research, the mechanism underlying this protective effect remained elusive. Until now.

Several studies suggested that, in one way or another, sickle hemoglobin might get in the way of the Plasmodium parasite infecting red blood cells, reducing the number of parasites that actually infect the host and thus conferring some protection against the disease. The IGC team's results challenge this explanation.

In painstakingly detailed work, Ana Ferreira, a post-doctoral researcher in Miguel Soares' laboratory, demonstrated that mice obtained from Prof. Yves Beuzard's laboratory, that had been genetically engineered to produce one copy of sickle hemoglobin similar to sickle cell trait, do not succumb to cerebral malaria, thus reproducing what happens in humans.

When Prof. Ingo Bechman observed the brains of these mice he confirmed that the lesions associated with the development of cerebral malaria where absent, despite the presence of the parasite.

Through a series of genetic experiments, Ana Ferreira was able to show that the main player in this protective effect is heme oxygenase-1 (HO-1), an enzyme whose expression is strongly induced by sickle hemoglobin. This enzyme, that produces the gas carbon monoxide, had been previously shown by the laboratory of Miguel Soares to confer protection against cerebral malaria. In the process of dissecting further this mechanism of protection Ana Ferreira demonstrated that when produced in response to sickle hemoglobin the same gas, carbon monoxide, protected the infected host from succumbing to cerebral malaria without interfering with the life cycle of the parasite inside its red blood cells.

Miguel Soares and his team believe that the mechanism they have identified for sickle cell trait may be a general mechanism acting in other red blood cell genetic diseases that are also know to protect against malaria in human populations: "Due to its protective effect against malaria, the sickle mutation may have been naturally selected in sub-Saharan Africa, where malaria is endemic and one of the major causes of death. Similarly, other clinically silent mutations may have been selected throughout evolution, for their ability to provide survival advantage against Plasmodium infection".

This research was carried out the at the IGC in collaboration with the Team of Prof. Yves Beuzard (Université Paris VII et XI, France), an expert in sickle cell anemia, and Prof. Ingo Bechman an expert in neuropathological diseases (Institute of Anatomy, University of Leipzig, Germany). Other IGC researchers involved in this study are Ivo Marguti, Viktória Jeney, Ângelo Chora, Nuno Palha and Sofia Rebelo. This project was funded by Fundação para a Ciência e a Tecnologia (Portugal), GEMI Fund Linde Healthcare and the European Commission's Framework Programme 7. 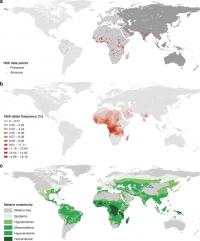 Global Distribution of the Sickle Cell Gene and Malaria Incidence