The world economic crisis has hit investment in clean energy and means its growth is no longer on track for the world to avert the worst impact of climate change, according to leading clean energy and carbon market analysts, New Energy Finance.

Presenting their Global Futures 2009 insights to the second New Energy Finance Summit on March 4th, NEF analysts say that although lower economic activity due to the financial crisis will reduce CO2 emissions, in the longer term the drying up of funding for lower-carbon energy solutions is likely to have far greater adverse impact on emissions.

Investment in clean energy - renewables, energy efficiency and carbon capture & storage - increased from $34bn in 2004 to around $150bn in each of 2007 and 2008. New Energy Finance's latest Global Futures report demonstrates that investment needs to reach $500bn per annum by 2020 if CO2 emissions from the world's energy system are to peak before 2020.

Scientific experts fear that continued growth of emissions beyond 2015, or 2020 at the latest, would create the strongest risks of severe and irreversible climate change. New Energy Finance analysis shows that a peak much before 2020 currently looks highly unlikely.

New Energy Finance expects investment in clean energy to hold steady at around $150bn per annum through the economic downturn and resume growth thereafter. In the Global Futures 2009 Base Scenario, investment is insufficient to drive down CO2 emissions from the energy system this side of 2030. Total investment is set to reach $270bn by 2015 and $350bn by 2020. However, emissions from fuel combustion will continue to rise from 28 Gtonnes of CO2 today to nearly 36 Gtonnes of CO2 by 2030

Global Futures 2009 estimates that the recession's direct impact on CO2 emissions is likely to be moderate, reducing the total by around 1 Gtonne per year (3%), and certainly not enough to avert a continued upward trend.

Substantial increase in clean energy expected in all scenarios

Global Futures 2009 predicts very substantial growth in clean energy over the coming decades in all scenarios. The Base Scenario shows investment growing to $348bn by 2020 and $461bn in 2030. Renewable energy will provide 26% of all electricity by 2030. This compares with average annual investment of $229bn and 23% of electricity generation by 2030 in the International Energy Agency's World Energy Outlook 2008 Reference Scenario.

In the Global Futures 2009 Base Scenario, CO2 emissions in 2030 from the world's energy system will be some 11.5% below the Reference Scenario of the International Energy Agency's 2008 World Energy Outlook, as a result of faster growth in renewable energy, lower energy intensity per unit of GDP and faster build-out of Carbon Capture & Sequestration.

Global Futures 2009 shows that achieving peak CO2 emissions by 2020 is possible, but an accelerated pace of investment is needed. In the Global Futures 2020 Peak scenario, CO2 emissions from the world's energy infrastructure peak at 30.8 Gtonnes in 2019. In order to achieve this, annual investments in renewable energy, energy efficiency and carbon capture need to reach $500bn by 2020, rising to over $600bn by 2030, compared to $350bn by 2020 and $461bn 2030 in the Base Scenario.

According to the International Panel on Climate Change (IPCC)'s fourth Assessment Report in 2007, limiting likely average global temperature to 2.0 to 2.4°C - thought to be the highest "safe" level - means stabilising CO2 equivalent concentrations at 445 to 490 parts per million, which in turn requires reaching peak CO2 emissions by 2015. Reaching peak CO2 by 2020, followed by a cut in emissions of 50% by 2050, should limit global average temperature increase to 2.4 to 2.8°C. In 2007 at its Heiligendamm Summit, the G8 acknowledged the need for CO2 emissions "to peak within 10 to 15 years", or between 2017 and 2022.

In January, New Energy Finance published a major report with the World Economic Forum entitled Green Investing: Towards a Low-Carbon Energy Infrastructure. In it, the analysts outlined the emerging elements of a low-carbon energy system, which will include a significant proportion of renewable energy, supported by four enablers: energy efficiency, carbon capture and storage, a smart grid and power storage. Global Futures 2009 builds on that work to look at contributions to emissions reductions from each form of energy, and the related costs.

The key drivers of changes to emissions from the energy infrastructures modelled in Global Futures 2009 include the following:

Over the past decade, the energy required to produce each unit of global GDP has declined by a total of 7.9%.

This arises from a combination of two effects: reducing energy intensity due to a shift from heavy industry to lighter industry and services; and improving energy efficiency. At any time there are many opportunities to improve energy efficiency at no economic cost. Other energy savings are achieved due to tightening regulations, such as building codes or gas mileage standards. Both require the investment of capital.

Curbing energy demand is essential for the containment of CO2 emissions. However, transaction, agency and behavioural barriers constrain energy efficiency's potential in practice.

In order to reach the CO2 peak by 2020, additional annual investments in energy efficiency beyond the Base Scenario are needed of $22bn in 2020 and $68bn by 2030. In the Global Futures 2020 Peak scenario, the world is, on average, 0.8% per annum more energy-efficient than in the Base Case scenario.

Although the pace of growth in wind installations may moderate somewhat during the recession, longer term the volume of energy produced is expected to reach new highs, with both a major expansion of onshore and the emergence of offshore as a new industry. The most prominent markets will be Europe, thanks to wind sites' proximity to consumers' markets and supportive policies, as well as in the US and China.

Steady progress in reducing costs is expected to trigger a wave of expansion over the next two decades, similar to the history of other high tech manufacturing industries. Continued public support to the industry in the period is also assumed as an essential element of policy until the industry reaches full cost competitiveness.

New Energy Finance anticipates that the costs of photovoltaic technologies may fall by a factor of four or more between now and 2030, to levels that are highly competitive with alternative forms of generation. This will lead to rapid growth of installations in both developed and developing countries.

In the Base Scenario, cumulative installations reach 590 GW by 2030, equivalent to more than 8% of total global electricity generating capacity. Investment grows to $146bn by 2020 from $40bn currently. In the 2020 Peak Scenario, annual investment in solar photovoltaics grows to $228bn by 2020, stabilizing at $200bn by 2030.

An essential driver of future reductions in CO2 emissions will be the switch from coal- to gas-fired power stations.

Although the recession has caused a substantial drop in the price of Phase II credits in the European Emissions Trading Scheme (from a peak of €29.33/t on 1 July 2008 to €8.06/t on 12 February 2009), the long-term trend in carbon prices is nevertheless expected to be upwards.

As a result, there will be an ongoing switch from the use of coal in power generation and industry towards natural gas. In the Base Scenario, this accounts for 2.5 Gtonnes of emissions by 2030, rising to 4.8 Gtonnes in the 2020 Peak scenario.

With many major CO2-emitting countries so dependent on coal, and the coal industry being such a significant provider of jobs in those countries (China, the US and Poland among others), it will be extremely hard to achieve peak CO2 without large-scale deployment of Carbon Capture and Storage (CCS).

In a recent study, New Energy Finance identified 184 active pilot projects, being developed by 153 consortia involving over 900 participating organisations in 28 countries. Many uncertainties remain about the ultimate technology choice for carbon capture (pre-combustion vs oxy-combustion), but New Energy Finance believes that with long-term carbon prices set to rise (see figure 6), investment in carbon capture and storage is on track to reach $5.1bn by 2020.

In the 2020 Peak Scenario, there is not much difference before 2020, as the technology goes through its pilot phase. However, in the period to 2030, investment in carbon capture and storage reaches $23.3bn, and as much as 0.78 Gtonnes of carbon are captured and stored annually.

Global Futures 2009 also looked at the impact on emissions of the following sectors: nuclear power, geothermal, biomass and biofuels, marine power (wave and tide) and hydro. Analysis of the impact of each in the Base Scenario and 2020 Peak Scenario is contained in the full report.

Reflecting on the insights produced by Global Futures 2009, Michael Liebreich, Chairman and CEO of New Energy Finance, said: "This should be a real wake-up call. New Energy Finance is generally on the optimistic side of the debate: even with the current recession we are more bullish on the shift to clean energy than most mainstream analysts. However, it is no longer possible to say we are on track to achieve peak CO2 by 2020. Something has to happen, either in terms of restoring credit to clean energy projects, or in terms of a surprisingly substantial outcome in Copenhagen."

Guy Turner, Director of the company's New Carbon Finance Division, said: "Our work at New Carbon Finance indicates that climate change policies and specifically carbon cap-and-trade systems are making a material difference to shifting from high-carbon to low-carbon energy. However, the Global Futures 2009 work is sobering: it shows that it just is not happening fast enough."

New Energy Finance estimates the investment needed to halt the rise in CO2 emissions by 2020 is roughly 0.44% of global GDP. Failure to address climate change, on the other hand, is estimated in the Stern Review and elsewhere to cost the world at least 5% of global GDP.

Global Futures 2009, developed by New Energy Finance, is an integrated model of the world's energy supply, using systems dynamics techniques to show how different elements interact. It is distinctive in building on the company's core areas of research, including clean energy investment activity and economics, technology trends and potential, and carbon price modelling. It allows scenarios for investment, capacity and emissions to be explored rapidly for different levels of growth, energy intensity, technology progression and policy measures.

New Carbon Finance, a division of New Energy Finance, is the world's leading independent provider of analysis, price forecasting, consultancy and risk management services relating to carbon. It has dedicated services for each of the major emerging carbon markets: Europe, global (Kyoto), Australia and the US, where it covers the planned regional markets as well as potential federal initiatives, and the voluntary markets.

About the New Energy Finance Summit and Awards Dinner

The second New Energy Finance Summit will be held at Vinopolis, London, 4th to 6th March, 2009. It is an invitation-only event for 200 senior investors, industry executives and policy makers in clean energy and the carbon markets. The fourth New Energy Finance and New Carbon Finance Awards will be unveiled at a gala dinner on 5th March, celebrating leading investors across a full range of asset classes, as well as leading professional service providers.

Clean energy investment not on track to avoid climate change 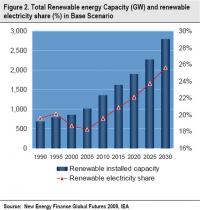 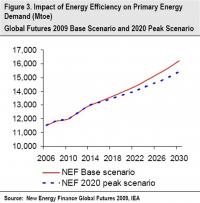