Scientists can have ambitious goals: curing disease, exploring distant worlds, clean-energy revolutions. In physics and materials research, some of these ambitious goals are to make ordinary-sounding objects with extraordinary properties: wires that can transport power without any energy loss, or quantum computers that can perform complex calculations that today's computers cannot achieve. And the emerging workbenches for the experiments that gradually move us toward these goals are 2D materials -- sheets of material that are a single layer of atoms thick.

In a paper published Sept. 14 in the journal Nature Physics, a team led by the University of Washington reports that carefully constructed stacks of graphene -- a 2D form of carbon -- can exhibit highly correlated electron properties. The team also found evidence that this type of collective behavior likely relates to the emergence of exotic magnetic states.

"We've created an experimental setup that allows us to manipulate electrons in the graphene layers in a number of exciting new ways," said co-senior author Matthew Yankowitz, a UW assistant professor of physics and of materials science and engineering, as well as a faculty researcher at the UW's Clean Energy Institute.

Yankowitz led the team with co-senior author Xiaodong Xu, a UW professor of physics and of materials science and engineering. Xu is also a faculty researcher with the UW Molecular Engineering and Sciences Institute, the UW Institute for Nano-Engineered Systems and the UW Clean Energy Institute.

Since 2D materials are one layer of atoms thick, bonds between atoms only form in two dimensions and particles like electrons can only move like pieces on a board game: side-to-side, front-to-back or diagonally, but not up or down. These restrictions can imbue 2D materials with properties that their 3D counterparts lack, and scientists have been probing 2D sheets of different materials to characterize and understand these potentially useful qualities.

But over the past decade, scientists like Yankowitz have also started layering 2D materials -- like a stack of pancakes -- and have discovered that, if stacked and rotated in a particular configuration and exposed to extremely low temperatures, these layers can exhibit exotic and unexpected properties.

The UW team worked with building blocks of bilayer graphene: two sheets of graphene naturally layered together. They stacked one bilayer on top of another -- for a total of four graphene layers -- and twisted them so that the layout of carbon atoms between the two bilayers were slightly out of alignment. Past research has shown that introducing these small twist angles between single layers or bilayers of graphene can have big consequences for the behavior of their electrons. With specific configurations of the electric field and charge distribution across the stacked bilayers, electrons display highly correlated behaviors. In other words, they all start doing the same thing -- or displaying the same properties -- at the same time.

"In these instances, it no longer makes sense to describe what an individual electron is doing, but what all electrons are doing at once," said Yankowitz.

"It's like having a room full of people in which a change in any one person's behavior will cause everyone else to react similarly," said lead author Minhao He, a UW doctoral student in physics and a former Clean Energy Institute fellow.

Quantum mechanics underlies these correlated properties, and since the stacked graphene bilayers have a density of more than 10^12, or one trillion, electrons per square centimeter, a lot of electrons are behaving collectively.

The team sought to unravel some of the mysteries of the correlated states in their experimental setup. At temperatures of just a few degrees above absolute zero, the team discovered that they could "tune" the system into a type of correlated insulating state -- where it would conduct no electrical charge. Near these insulating states, the team found pockets of highly conducting states with features resembling superconductivity.

Though other teams have recently reported these states, the origins of these features remained a mystery. But the UW team's work has found evidence for a possible explanation. They found that these states appeared to be driven by a quantum mechanical property of electrons called "spin" -- a type of angular momentum. In regions near the correlated insulating states, they found evidence that all the electron spins spontaneously align. This may indicate that, near the regions showing correlated insulating states, a form of ferromagnetism is emerging -- not superconductivity. But additional experiments would need to verify this.

These discoveries are the latest example of the many surprises that are in store when conducting experiments with 2D materials.

"Much of what we're doing in this line of research is to try to create, understand and control emerging electronic states, which can be either correlated or topological, or possess both properties," said Xu. "There could be a lot we can do with these states down the road -- a form of quantum computing, a new energy-harvesting device, or some new types of sensors, for example -- and frankly we won't know until we try."

In the meantime, expect stacks, bilayers and twist angles to keep making waves.

For more information, contact Xu at xuxd@uw.edu and Yankowitz at myank@uw.edu. 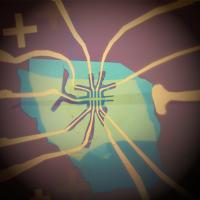